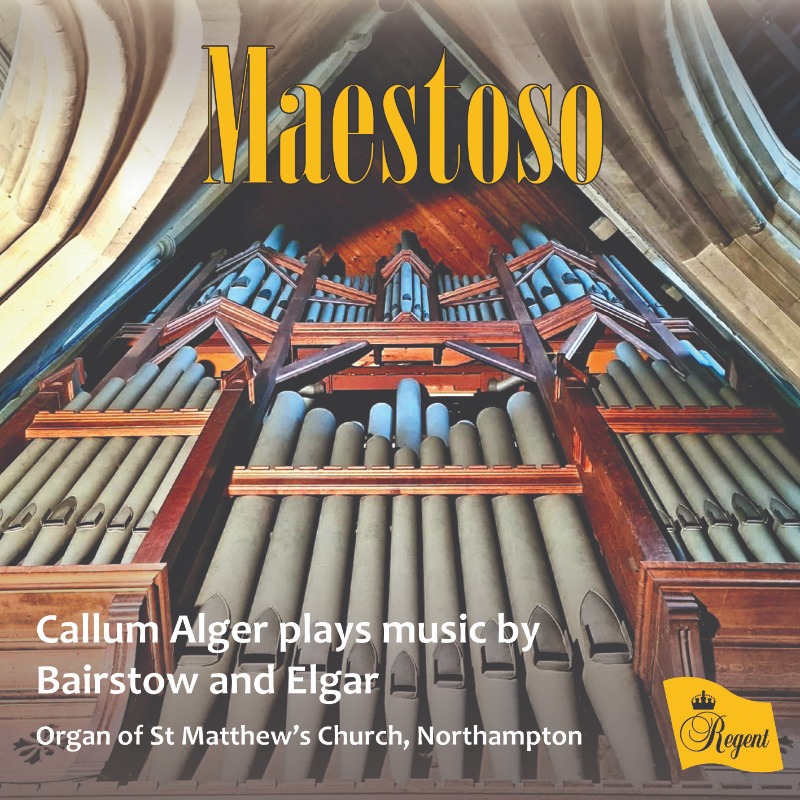 His first love was music and so it is appropriate that the church has a four-manual 1895 J W Walker & Son organ, which remains largely in its original form from 1895 and has successfully avoided tonal alteration. It has a Pedal Trombone extended to 32ft. It also has a good acoustic which the Regent recording engineers have successfully captured.

Alger, currently Director of Music at St Peter’s Collegiate Church in Wolverhampton, is a talented organist who utilises the many sounds of St Matthew’s to great effect including the 32ft reed. Bairstow’s Prelude in C, with which he opens his recital, makes full use of the diapasons and reeds whilst, with Bairstow’s popular Evening Hymn, there are lovely expressive dynamics through efficacious registrations.

The two main works on this disc are sonatas by Bairstow and Elgar and they are included to show their different compositional approaches.

Bairstow’s Organ Sonata suits this organ well as Alger superbly demonstrates in the colours he selects for the first movement. The scherzo second movement is full of energy and the reeds again deployed to make an impact in the fanfares.

Alger understands English organ music of this period as he wonderfully illustrates in one of the finest organ sonatas in the repertoire, Elgar’s first in G major. The first movement is glorious and full of drama. And the listener is not disappointed as, from the outset, the warm full-blooded registrations we have already heard are once again displayed; reeds and diapasons making an impact along with the clarinet in the beautiful quiet sections. The quick change of manuals and the phrasing is smooth.

The articulation in the closing section where the time signature changes from 9/8 to 3/4 builds up pace and excitement capturing the symphonic qualities of the piece rounding of a marvellours interpretation of this first movement.

Alger’s colouring in the other movements and his rhythmical technique are equally excellent. He brings out all the detail, the left-hand solo in the second movement and the more lyrical pensive sections in the third which ends with a delightful ppp B-flat. The presto has different dynamics that this young organist expertly manages concluding with a maestoso flourish.

This CD is aptly called Maestoso as Alger captures the powerful essence from beginning to end on this superb disc, using the full tonal range of the St Matthew’s instrument in a delightfully well-played recital of English romantic music.