Cox Keep me as the apple of an eye; Tallis In ieiunio et fletu; McKevitt Lumen; Sir John Tavener Funeral Ikos; Skempton And there was war in heaven; Morales Parce mihi, Domine; Communio ‘Lux aeterna’ from Missa pro defunctis a 5; Byrd Peccantem me quotidie; Purcell Thou knowest, Lord, the secrets of our hearts; Park Sequence: In Parenthesis; Guest For the Fallen; Daley In remembrance from Requiem; O’Donnell Present yourselves as a living sacrifice; Marsh I take thee; Rodney Bennett A Good-Night.

Available as an MP3, iTunes, CD or FLAC and ALAC formats 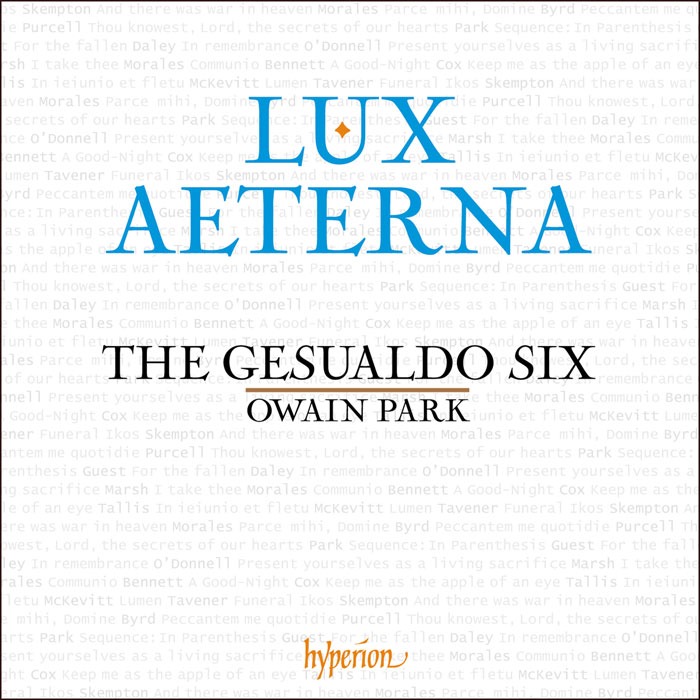 The singing is precise, divinely presented in a way that it touches the soul with sonorous resonant basses and superb countertenor and tenor lines adding to the intensity through marvellous phrasing. The Purcell, one of the most famous works in the choral canon is always a welcome addition delivered here with timeless simplicity.

Owain Park has curated a beautiful sequence of pieces that bring together ancient and modern including two pieces by organists of Westminster Abbey. Douglas Guest’s short gem For the fallen based on Binyon’s words 'They shall grow not old', enable the Gesualdo Six to fully capture the spirit in a moving performance, and James O’Donnell’s composition also has rich harmonics, he is soon to depart the Abbey for pastures new in America. For the fallen is followed by Eleanor Daley’s lovely composition based on the poem attributed to Mary Elizabeth Frye Do not stand at my grave and weep.

All the choral compositions illustrate excellent writing for voices through exceptional use of harmony.

Park’s contribution is centred around Welsh poet, David Jones’, In Parenthesis based on the artist’s experience as a young volunteer solider. Samuel Mitchell’s deep resonant narration is wonderful. Lots of familiar music interweaved within the text.

The Gesualdo Six end with Morales Communio ‘Lux aeterna’ polyphonic music that this ensemble produces to the highest quality with beautiful, mellifluous powerful lines. It is followed by Sir Richard Rodney Bennett’s A Good-Night with words by Francis Quarles (1592 -1644) 'Close now thine eyes and rest secure … No sleep so sweet as thine, no rest so sure'.

A concatenation of music that delivers what it set out to do: exploring shades of positivity and the hope that the good someone has brought into the world will live on after they have passed.