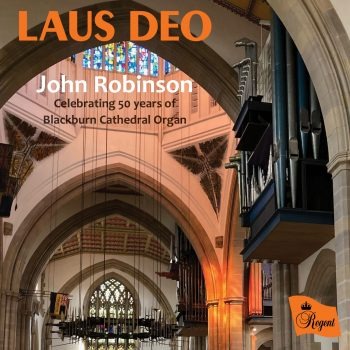 Harvey’s Laus Deo was written in 1969, the year the organ was designed and built. From the outset of this short but thrilling composition, Robinson shows his dexterity and, what we can expect from the rest of his recital. A glittering start as we begin the tour of this magnificent organ.

Pott’s 2002 work, the year the Wood rebuilt was completed, is a remarkable, taut work which, as Robinson points out contains brilliant counterpoint. All the nuances within the score come over well through Robinson’s effective registrations, nothing impedes the clarity of Pott's writing.

Former Blackburn Cathedral Organist, Dr John Bertalot, whose vision in 1964 began the design process, composed his wonderful and humorous Variations for Pedals on Regent Square, to celebrate the new and enlarged pedal division. The hymn-tune variations are delightful and the quirkiness of the piece demonstrates the huge range in Robinson’s palette. It is hard to imagine that 90% is just pedals. That two feet can make such an impact is amazing. The pedal glissandi sound impressive and the use of the Cymbelstern (8 bell) adds yet more colour as this piece comes to an exiting conclusion.

Percy Whitlock’s Sonata in C minor completed in 1936, the year ground was broken on the new buildings at Blackburn Cathedral, ends this recital and every little feature of the Blackburn instrument is demonstrated as Robinson brings out the harmonic writing through the organ’s symphonic range. Influences of Rachmaninov, Delius, Finzi and Elgar can be felt. Robinson nimbly takes us through the Canzona and Scherzetto both characteristically Whitlock.

Again, the clarity helps capture the spirit of the piece helped by the Regent recording team who have done a superb job. The Choral builds exciting climaxes throughout the twenty-minute performance but in the end, it draws to a peaceful close with beautiful registration. A convincing and satisfying performance.

At the end of the booklet there is a short article by the Cathedral Organist Emeritus Dr John Bertalot a fascinating insight titled: ‘We nearly didn’t get our magnificent organ.’

Robinson has curated a well-balanced virtuosic and dazzling programme that shows off the minutiae and textures of this fabulous instrument, from the mighty reeds, the full swell tuttis, diapasons, through to the strings that float around the cathedral.