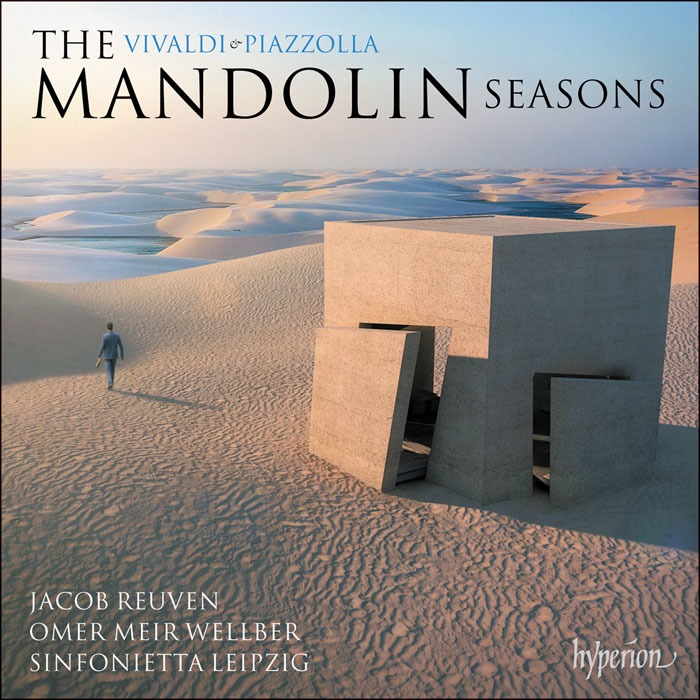 Internationally acclaimed mandolin player Jacob Reuven and accordionist, harpsichordist, and conductor Omer Meir Wellber, dazzle in these fresh interpretations that work brilliantly in a version that will make a satisfying addition to any CD collection.

Piazzolla’s Las cuatro estaciones porteñas were envisaged as an interconnected cycle and were composed between 1965 and 1970 as individual short works – all of them as David Vickers explains, feature explicit quotations from Vivaldi. Of course, when it is winter in Venice, where Vivaldi hails from, it is summer in Buenos Aires.

Reuven and Meir Wellber split Vivaldi’s concertos choosing to perform the relevant Piazzolla porteñas after each of the Venetian's seasonal contributions. This helps show the influence and connection between the two composers. It makes for an electrifying disc full of vigour, vivacity and the alluring passion created by the accordion and mandolin (used instead of a bandoneon) plus the resonant sounds from the super small band of string players from the Gewandhausorchester performing as Sinfonietta Leipzig. Their precision and rhythmic verve add sparkle to the recording.

Both soloists know how to use their instruments creatively and effectively, deploying techniques that show off their virtuosic skill. The duo effortlessly glide in in and out of each other's space and it is a joy to hear the improvised continuo. Meir Wellber in conversation with Inge Kleopfer, says his playing is entirely improvised in the continuo parts granting each piece a sense of uniqueness, charming candidness, and startling vivacity. That is the reason behind this ‘live’ recording.

The disc ends with Piazzolla’s take on autumn in Buenos Aires where Moritz Klauk adds a warm solo cello part to a piece that conjures up all those feelings associated with the vibrant Brazilian sensual and stimulating city bringing an exciting climax to a disc which is most definitely is a must buy.