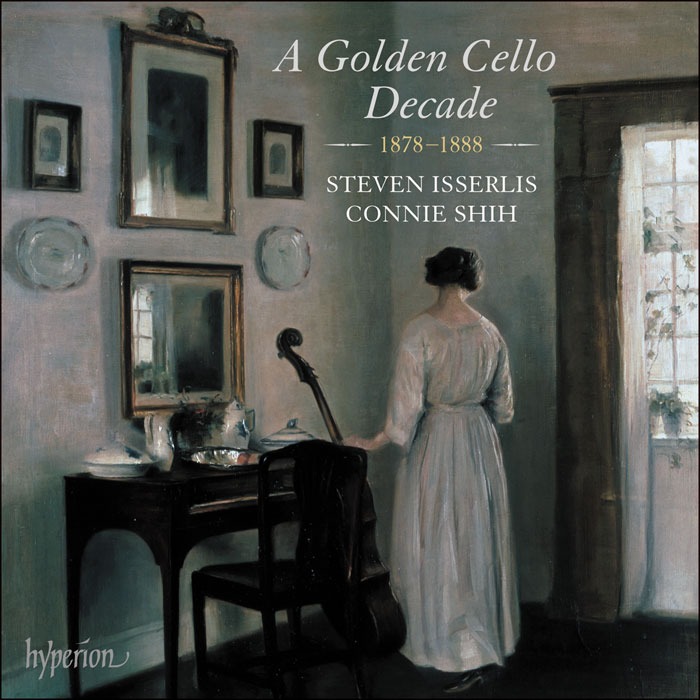 Isserlis recognises there was plethora of music that emerged between 1878 and 1888 specifically for cello and piano hence the title of the album; a period that saw sonatas from Grieg, Strauss, and Brahms’ second as well as the second printing of Franck’s Sonata.

Opening with Bruch’s melancholic and popular Kol Nidrei, Isserlis and Shih are joined by harpist Olivia Jageurs all producing a sensitive and heartfelt rendition. The opening intensity is delightfully executed, and the entrance of the cello continues with beautiful dynamics. As Jageurs comes in after five minutes this piece burns with a sensuous sensitivity. A joy.

Strauss’ Cello Sonata in F which Isserlis plays here in its 1881 original version, is conveyed with lyrical interaction between cello and piano and, once again, thoughtfully interpreted, with dynamics that demonstrate the empathy between performers. It was composed for a competition but as Iserliss points out Strauss came away empty-handed. ‘Surely the only instance in musical history of competitions making a mistake? Haha…’ he writes in the excellent notes.

On the other hand, Luise Adolpha Le Beau’s sonata submitted for the same competition also did not win, although she won a lesser prize for her three pieces for cello and piano. According to Isserlis it, like the Strauss, has influences of Mendelssohn although he does point out that in common with Strauss there is one theme in the finale which some may find too naïve – in this case the opening subject.

Its lyrical opening and the way Isserlis bow dances across the strings and the lines sing, is present all through this movement. The andante tranquillo radiates an intensity in the how the cello works through its registers coupled with delicate piano playing. Its soft and gentle atmospheric ending as the final notes disappear into the ether is exquisite. The concluding Allegro vivace sees both performers get the best out of their instruments.

I enjoyed this work immensely.

Dvořák's Four Romantic Pieces, originally for violin and piano have been arranged for cello by Isserlis and they work well with another captivating performance.

The album closes with two short pieces. Ernst David Wagner’s Kol Nidrei which is included by Isserlis because he was tickled by the thought of how utterly apoplectic his revered namesake would be at the sight of the track listing: ‘Wagner: Kol Nidrei, ’ is powerfully expressed.

Finally, we hear Isserlis's own arrangement of one of Isaac Nathan’s Hebrew Melodies and the album concludes having successfully communicated the beautiful timbre of the cello, superbly delivered sonorous lines and performances where the mood and nuance of each piece is transmitted with such ease and simplicity by Isserlis and Shih.

Undoubtedly, a disc that will be enjoyed for everyone not just cello enthusiasts.