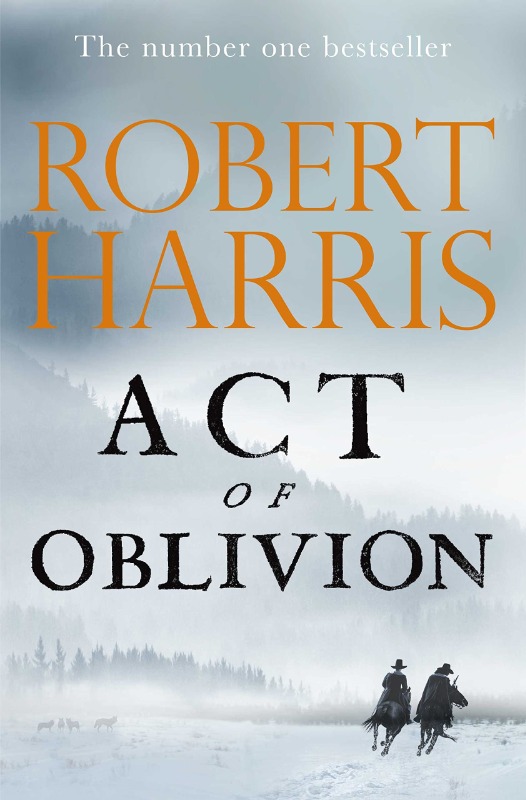 Whose ‘Oblivion’? Is the ‘Act’ a form of action performed by a person? Is it a euphemism for murder?

We soon find out as Robert Harris’ tale unfolds. He must be so grateful to the Parliament of 1660 for giving him such a theatrical title for his new novel. Perhaps royalties are due.

Just in case you were unaware of events following the English Civil War and the subsequent Restoration, the Act of Oblivion pardoned those who had fought as Republicans, except for those who had signed Charles I's death warrant. Virtually all of them were caught and executed (or died of natural causes), but for two: Colonels Goffe and Whalley escaped to America and were sheltered there by sympathisers. It is the fate of these two that Harris’ book fictionalises.

Harris uses known historical events and myths along with his own speculations. For example, he imports the legend of ‘The Angel of Hadley’, where an unknown soldier, in this case Colonel Goffe, appears apparently from nowhere to organise the inhabitants of a town to resist an attack by native Americans. He immediately disappears, never to be seen again. Verisimilitude is not offended by ‘real’ events like this being grafted onto the Colonel’s story. Indeed, the smoothness of the transplantation enhances the readers’ pleasure.

For the modern reader, the Colonels have some redeeming qualities, but their religious zealotry makes empathy difficult.

So, how do you engage the reader’s emotions with characters who are less than admirable? Easy - you create another who is even less likeable. In this case, Goffe and Whalley’s nemesis is Richard Nayler.

Nayler’s witnessing of the death of Charles I drives a wedge between his rational faculties and the darker reaches of his psyche. He becomes every bit as zealous in his pursuit of the Colonels as the Puritan sects he detests. Even after Parliament suspends the ghoulish executions of the regicides, he obsessively continues his pursuit of the Colonels as a personal vendetta.

He pursues them, unsuccessfully, to the New England Colonies. Later we pick up his story back in London and eventually find him languishing in Paris. By chance, he picks up the trail of Goffe again (Whalley died many years before) and gets the Colonel in his sights.

And here we come to the python in the bath of Robert Harris novels: how to form a successful resolution? Everything has been in place up to the last few pages – research is exemplary; sentences have been honed and crafted; action has been organised and drilled – yet there is still one last illusion to pull off: the ending.

In his most artistically successful novel,An Officer and a Spy, the outcome is clear since so much history of the Dreyfuss affair is extant. Not so in the case of Goffe. The ending seems to have been added to requite the need among some readers for a certain kind of resolution, and it does not feel right to me. Going into this any further would reveal too much and that would be unfair to the author and readers.

Having issued a stricture on a famous writer’s work, I now find myself challenged to end this review effectively.

Act of Oblivion is a read that will satisfy the thirst for atmosphere and detail of any lover of historical fiction.


Act of Oblivion is published by Hutchinson Heinemann.