Bitter Fruit Ripening: The Kilt Of Many Colours By David Bleiman 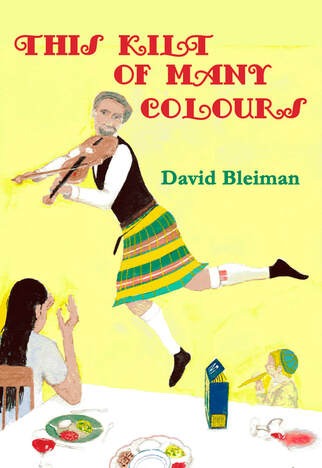 There is much of sad, surpassing beauty in David Bleiman’s expansive new collection of poems. If a negotiated sense of identity, or rather the dissolution of identity in a glorious oceanic harvest of heredities, is an overwhelming theme here, then so is the voice of the individual singer and of history’s silenced. And it is to the latter that Bleiman turns especial attention.

Hymning the voice of the dead in song and in verse, calling forth the dead shamanically, the poet is aware of the power and the obligation vested in him. Setting his antennae towards all that has unfolded, in the direction of ‘that river which gives to the sea’, Bleiman discovers the ‘rough-tongued bell’ of Duende in the authority of his interpretive delivery. A passage to the impassioned realms of the past and the imagination, he commits words to air, no less charged with emotion than in the picaresque, Illyrian world of the Portuguese Fadista, in another fine poem of Duende, Graham Mort’s ‘Fado’.

Lorca’s expression is serviceable, if not definitive: the transcriber of rapture and torment, who clears his throat before he abandons himself to the wind, does so in order to distil a gravid response to that which is otherwise unutterable. Here, we might include the ‘Lacquer wood fiddler’, whose figurative significance hugely outweighs his purchase price. Bought cheaply in Moscow’s GUM, his ‘Klezmer’ credentials bespeak the breaking of nations, the Jewish diaspora and the seismic shifts of Russian history:

when the Cossacks ride out
in the morning.’

The ‘Ayy’ carved beneath the figurine’s base is of unknown provenance, but Bleiman is too knowing a polymath not to draw inference from the Classical Greek αίαι - the unbearable, often collective, long sigh of grief that accompanies Tragic denouement. And in the end only a fine line separates the Plains of Troy from the village burnings of the Steppes, or the bombed-out towns of Syria in our time.

In such ways are cultures and heritages indivisibly connected: music, song and poetry may ameliorate divisions precisely as they embrace the individuated aesthetic principles on which each is built. David Bleiman’s own origins are complex: a Scots Ashkenazi Jew living in Edinburgh, by way of Cape Town, he wears an instinct for trans-continental cultural music as easily as an educated, cosmopolitan Mittel European will. But, as he might have said, in an, in any case, beautifully modulated prelude to the poems, this is the point: remove the debased nationalism that is built on bogus recreations of nationhood, and you are free to luxuriate in gorgeous linguistic distinctions, to submerge the preoccupation with identity in a cacophony of gloriously diverse twittering, like Paul Klee’s eponymous machine.

And twitter, Bleiman does – in an erudite macaronic confection of Scots, Yiddish, Spanish and German. The Kilt of Many Colours is a book that was waiting to be written; a celebration of a thriving hybrid culture that draws disparate threads into splendid knots whose untangling is fundamentally unnecessary, when you remember that McIlvanney’s description of the Scots as a ‘mongrel nation’, to which the poet refers, need not be construed as pejorative. Instead, Bleiman proposes a joyous tapestry made up of the inherently polychromatic textures of all cultures: 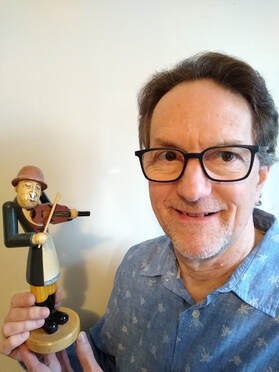 David Bleiman
Such dynamic munificence – the ‘bolt’ is literally a cloth of illuminant gold – is realised elsewhere in the occluded subtlety of a kind of reconciliation, a desire to heal the terrible scars of the Holocaust. If Bleiman’s poem of Heimweh - ‘Auf Wiedersehen’ – cannot accommodate the brutality of a landscape temporarily disfigured by the Third Reich, then it may take silent consolation in the sibilant ‘shifting shadows of the smoke / and the moving pools of sunlight, / wet on the clearing grass’. The shifting chiaroscuro of nature points to another, more enduring, form of narcosis, and it will sustain far beyond the bricks of crematory ovens and the shoring up of shallow graves.

David Bleiman’s embrace of different dialect forms reverses MacDiarmid’s insular nationalism; a respecter not of cultural hegemony, but rather of difference, his wide-angled lens embraces elements of vernacular comedy alongside elegy and melancholy. Yielding, albeit tangential, echoes of Tom Leonard and perhaps Liz Lochhead, his poems bring joy, and a subtle kind of edification; they are maps of place and purpose, of family and history.

Themselves identifiers, Bleiman’s poems mirror that which they describe. In ‘Place Markers’, the poet dissolves the illusion of entitlement in a cross-cultural unanimity of historical memory. Ancient marks in sticks and stones are our Braille of inference, the tools of recognition and, most significantly, of human continuity; their presence underwrites our own, and the natural world will endure, from Checagou to Andalusia, from Pittenweem to the Viennese Judengasse:

‘five hundred years of sun won’t clear the dew
from gardens where the pomegranates grew.’

The centrality of shtetl - the Yiddish for home – lends the poet’s narrative the quality, almost, of a paradigm. Repeated throughout this fine collection, the term may be a figure for both deracination and recourse, no more so than in the sun-kissed diptych of ‘Villages of our dreams?’, whose distinct senses of place – shtetl and pueblo - mark entirely opposed experiences with a quotidian verisimilitude of purpose, before settling to the dominoes and brandy of a persuasively languid Spanish afternoon, ‘where / a waiter flicks flies off the bread’.

And the principle of shtetl re-emerges in ‘Why Dae A Scrieve in Scots?’, a profoundly wise dialect poem of explanation and resolve. Here, Bleiman subordinates the idea of ‘home’ to language, to a definition of place as collective cultural investment. Cutting an historical swathe across the Hapsburg Empire and Russia of his origins, to South Africa and finally to Scotland, the poet is obliged to conclude that he is shaped by a concatenation of influences as benign as it is multifarious, and whose promulgation in the rich metrical texture of the spoken word is as natural as the drawing of breath:

‘that poesia makaronishe seeps in
an oot o me, like Weltschmertz;
so mebbe why A scrieve in Scots
is why A write at aa.’


Also by Steve Whitaker...
Poem Of The Week: 'Vanitas Vanitatum' By John Webster (C. 1580 - C. 1632)‘Those Things We Do Not Say’ : All The Beautiful Liars By Sylvia PetterPoem Of The Week: 'Blood And Lead' By James FentonPoem Of The Week: 'The Urine Specimen' By Ted KooserPoem Of The Week: 'Night Garden Of The Asylum' By Elizabeth Jennings
Nor should we forget the moments of tender lyricism which make of this wonderful book a kind of love song to family, to the lost, and to the power of language in the evocation of exquisite irony. From the intertwining of the ‘fruiting clusters’ of words and the nurturing inter-dependency of a nascent tree and a new granddaughter in ‘Rowan’, to the beautiful, unitary tones of a Scots-Yiddish lullaby – ‘A squeeze of honey in cinnamon milk’ – several cultures speak in one quietly comforting voice.

A fruitful clotting, like the metonymic ‘Marmalade’ series of poems, whose good offices figure, also, for the cultural tinctures and negotiated histories of Spain. The Cordoban Mezquita, whose ‘unique’ appearance was seemingly disfigured in the Sixteenth Century with the inclusion of a Christian chapel at its heart, has been seamlessly readjusted to the popular imagination. The Ozymandian figure of Carlos I, who approved the addition, later looked with regret on his own works. But time, and a mutable cultural aesthetic, have resolved the architectural landscape for him. The natural emollient of David Bleiman’s poetics makes virtues of assimilation and accommodation. It is a characteristic of his hopeful disposition that the division and dissolution of our own country, presided over by another Ozymandian politician, will be of similarly limited tenure:

‘Spring blossoms affirm by their myriad flames
that the oranges here
will ripen again
and we shall make marmalade
from bitter fruit.’ (‘Bitter fruit ripening’)


This Kilt of Many Colours is published by Dempsey & Windle.