Between The Acts: The Still And Fleeting Fire By Amina Alyal & Oz Hardwick 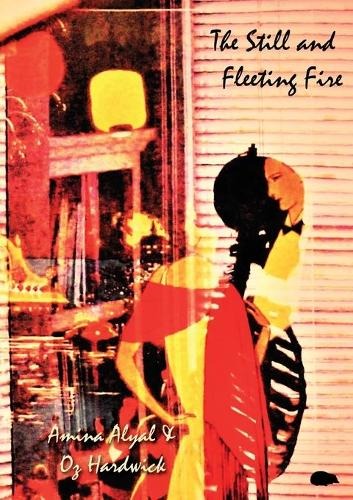 Amina Alyal and Oz Hardwick bestride the earthly universe like prophets in their prose-poem collaboration for Hedgehog Poetry Press. That one of the subjects of their philosophical exploration is the pandemic need not be undermined by the tardiness of this review, because there is a wider serviceability to their poetic mandate: the pandemic, here, is one symptom only of a greater malaise, as the authors’ katabatic descent indicates. The underpinning of the journey that the narrator(s) undertake in The Still and Fleeting Fire is overwhelmingly Dantean, finding mirrors to the vagaries of human existence in the frozen wastes of Hell, the cathartic consolations of Purgatorio and the pyrrhic blandishments of Paradiso.

The darkness and thematic complexity of their speculations lends Alyal and Hardwick’s slim volume of twenty-one poems resonance and currency as we seem to lurch from crisis to catastrophe. On the face of it a detached dissection of existential anxiety, the narrator roves the underbelly of a world we are obliged to acknowledge, pinioning haphazard hypocrisies and iniquities as though to declare Contrapasso on the agencies of corporeal malevolence. But, powerless to countermand the blindness of ‘false consciousness’ (since we are all complicit players in this game), the received effect amounts to a holding up of the hands in a gesture of helpless horror, in the manner of the victims of the firing squad in Goya’s magnificently animated The Third of May 1808.


Always evocative, the words conjure decadence and decline by remaining somehow extraneous to the contemporary world’s worst excesses...
Registered in the kind of flowing linguistic stream that characterises, especially, Hardwick’s recent formal excursions, we hear a polemic of numbed fear gravitate towards conspicuous silence. Abandoned to the pandemonium of their own speculation, Alyal and Hardwick’s vertiginous journey is rich in infelicity, in unrestrained vigour, making a paradox of the gravity of its themes, much as the multi-hued carnival of character and landscape in the Commedia is an ironic antidote to Dante’s graphic illustration of his own map of consequences. But the narrator’s ‘pyromancy’, to utilize a term of divination from the pamphlet, is well-served by the incendiary vitality of the language. A rendering of the words themselves, of the sounds they make in concatenation, seems to me to be as significant a conduit to meaning, yielding immense satisfaction in their own right, like those of Dylan Thomas:

A stone lion stares from a raging fire, its clear quartz eyes streaming with amplified tears of wrath and passion. All we can see are afterimages of afterimages. The King is dead, the king is red; long live smoke and funhouse mirrors. (‘The Lion Never Sleeps’)

Always evocative, the words conjure decadence and decline by remaining somehow extraneous to the contemporary world’s worst excesses, making of the observed landscape a dystopia, an era in cultural and political tumult, like the Florentine republic. A document of despair, but also of the energy expended in tumult, an eloquence of teeming endurance, the observations amount also to a sense of affirmation.

The concatenation I refer to is one of conjunctions, of tokens of the Renaissance and the modern picaresque fused into unlikely unity: more than ‘state of the nation’ witnesses, the authors do for our towns and cities what the poet and artist Cliff Forshaw does, elsewhere, for Hull, by insinuating a realm of historical suggestion beneath the city pavements as a cynical corrective to the cultural depredations of the present. If Forshaw’s ‘guide’ is the satirick muse, Alyal and Hardwick’s prism is the polychromatic mythmaking of Dante Alighieri, whose luminous clarity of thinking, in a city republic of internecine trauma, lends itself very usefully to the ongoing drama of living in the twenty-first century.


Wonderfully animated, Alyal and Hardwick’s narrative is as unrelenting as the anthropomorphic flames of MacNeice’s ‘Brother Fire’.
And the two eras are made indivisible in the wider discourse, as though punishment and redemption were the touchstones of human understanding, if not the deliverers of the greatest damage. Wandering, like Shades between pavement and purgatory, urban dwellers go about their daily business in parallel place and time, unaware of their location in the psycho-geographical continuum, whose treadmill they unknowingly take turns in actuating:

In the city beneath the cities, grey men stride with furled
umbrellas and tablets weighted with figures. Pavements are
grooved with heels and wheeled cases, and the breath of agitated
buildings is stripped to ribbons by couriers’ bikes weaving
between time zones. (‘Between the Acts’)

The feeling of urgency is precipitous, as if the whole ‘boiling’, or the end, were dangerously close to hand. Wonderfully animated, Alyal and Hardwick’s narrative is as unrelenting as the anthropomorphic flames of MacNeice’s ‘Brother Fire’. In fact, fire’s binary propensities – it burns as it enchants; creates as it destroys – bring further ambiguity to a story of broken threads, obviate the establishing of general meaning, for this disparate narrative is grounded in several spaces at once. From the rapacious ‘traders in red braces’ of Thatcher’s monied metropolis (‘The Price of Everything’), to the Icarean pilot whose sense of glamour was airborne, but whose dream-view is of an ironclad Paul Nash seascape resembling the ‘grey cloak’ of death (‘The Duality of Afterthought’), all roads, serviced by a driver-guide with ‘The Knowledge’, most likely lead to nowhere.

And fire is a fitting figure for that which is both seductive and monumentally symbolic. The Still and Fleeting Fire weaves an astonishingly clever and profoundly wise path between the past, the present and an increasingly circumscribed future. The most studied irony, in a book of ironies, is that Dante’s visceral depiction of the afterlife is not very far removed from the unfolding conclusion to our own:

As wire and hunger prick our flesh, we argue and plead like the tumbling Tower of Babel,
herding stray animals into temporary pens lined with worthless
banknotes and cancelled visas. Scientists produce new strains of
bluebirds and deep distrust, and the roads are blocked by fallen
stars and fallen angels. Cue the music and the closing credits.
Please leave your ideals as you found them. (‘The Last Border’)
{clear}

The Still and Fleeting Fire is published by The Hedgehog Poetry Press.