Barnstorming Premiere At The SJT 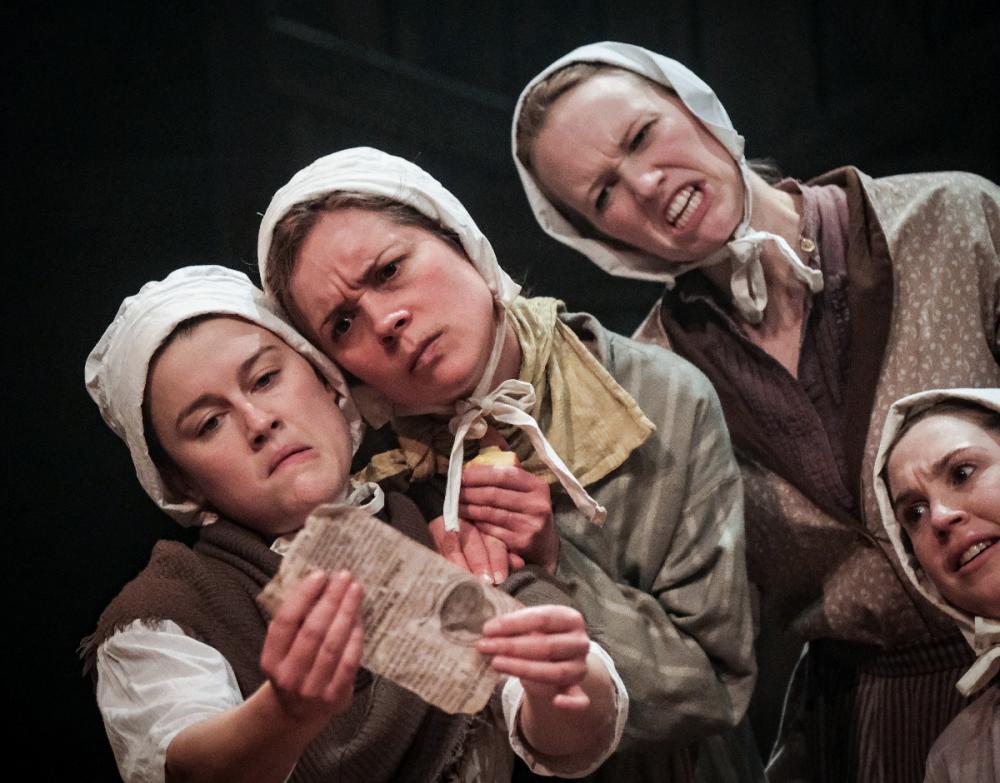 Emma Denly, Elizabeth Crarer, Jessica Dives, Susanna Jennings. All photos by Tony Bartholomew
The Red Barn Murder, as the popular press would call it in 1827, was one of those capital crimes that gripped the public of Jane Austen’s time and became part of a culture that lived on for generations. The village, Polstead, Suffolk, where the murder took place quickly became a tourist attraction and the barn, where Mary Marten’s body was discovered, was haunted by souvenir hunters. The particularly gruesome nature of the killing and the manhunt for the murderer shocked and scandalised newspaper readers and inspired broadsheets, ballads and, later, sensational Victorian melodramas, probably the most popular in theatre until eclipsed about fifty years later by a similarly brutal murder, that of sweet Fanny Adams, which added a phrase to the language and a new sensation. 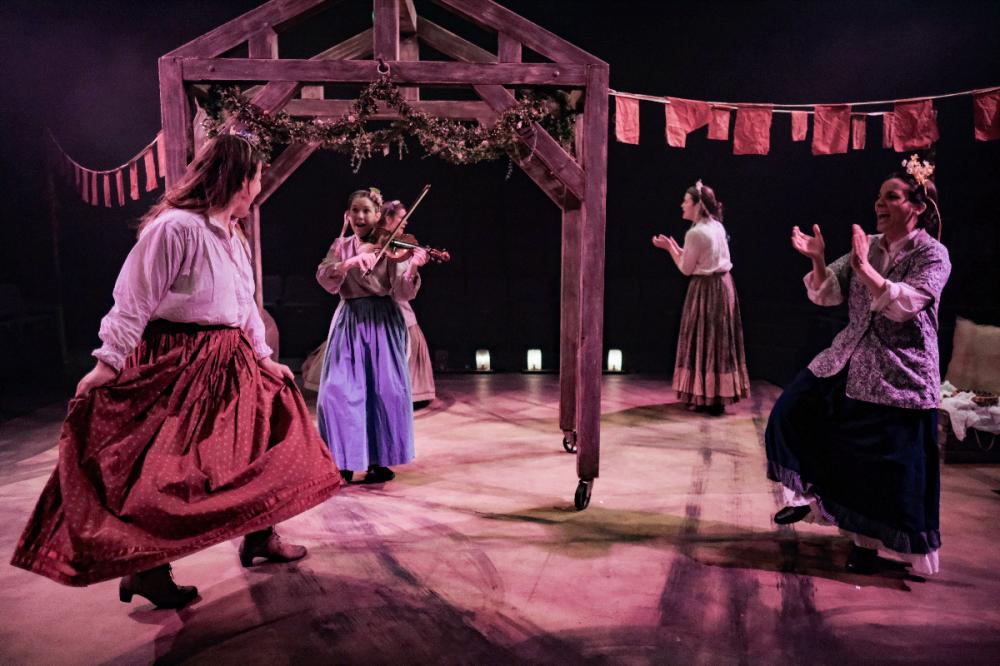 Sarah Goddard, Susanne Jennings, Elizabeth Crarer, Emma Denly, Suzanne Ahmet
The fascination with Maria Marten, however, continued into the twentieth century with five film versions and several television and radio dramatisations. Beth Flintoff’s The Ballad of Maria Marten, which makes its world premiere at Scarborough’s Stephen Joseph Theatre, tells the story of how the unfortunate Maria was shot dead by her lover and father of her child, William Corder, who fled the scene and how her body was later discovered after the truth came to her stepmother in a dream.

But this play, directed with great mental agility by Hal Chambers, is a world away from the moustache-curling villainy and lecherous ogling of the old shockers. It is narrated somberly by the ghost of Maria and focuses on the events through her eyes. Indeed we never actually meet the murderer. Elizabeth Crarer (herself, the artistic director of the Heroine Project, dedicated to shining a light on women who have been overlooked or traduced) gives probably the performance of her career to date as the tragic central character. At the end of the night, we feel as though we know Maria as a real woman, not perfect but certainly very much more sinned against than sinning. 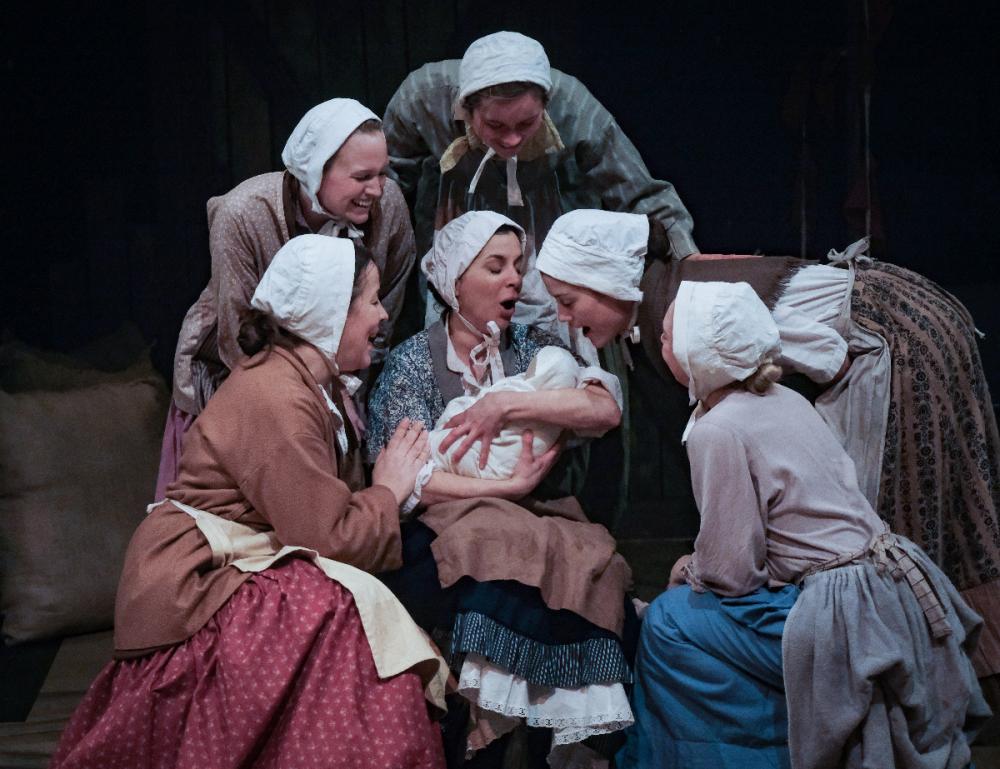 Ballad of Maria Marten 2 - Sarah Goddard, Jessica Dives, Suzanne Ahmet, Elizabeth Crarer, Emma Denly, Susanna Jennings
Thomas Hardy was at pains to call his Tess (Of the D’Urbervilles), with whom there are obvious similarities to Maria, a ‘pure woman’. They are both farm girls wickedly abused and seduced by men of ‘higher station’, have unwanted children, are ostracised and die tragically. Like the sympathetic Hardy, Beth Flintoff celebrates the virtues of the beautiful ‘fallen’ woman . As the playwright notes, ‘I didn’t want Maria to be a victim any more … [but seen as] intelligent, brave and wryly funny ’. She is a spirited girl who can laugh and sing and has qualities that attract all men.

From the moment, however, she has to trade kisses for food for her starving family, it seems she has been placed by dire circumstances on a path to madness and destruction, as she passes through the hands of Thomas Corder (Susanna Jennings), the murderer’s elder brother who abandons her with child; the effetely aristocratic Peter Mathews (Emma Denly), whose love for her is not strong enough to withstand being cut off by his family and, finally, the insanely manipulative William Corder.


Also by Andrew Liddle...
Jazz Album Review: In The House Of Horrors.Jazz Album: Hot Lips Page: A Retrospective PerspectiveThe Lonely Chapatti’s Food For ThoughtPete Lapish Galleries Go On LineAlone In Berlin In York
In their innocent youth, Maria and her friends had formed the Hazard Club, which involved such girlish forfeits as having to walk backwards all day. In different ways, the members of this club will come to have lives totally dominated by men who impose hazards and conditions which seem to savagely mock their youthful innocence. Sarah Stowe (Suzanne Ahmet), for example, has one baby after another to different fathers; Lucy Baalham (Susanna Jennings) is similarly led on by William Corder; Theresa Havers (Emma Denly) is beaten by her husband for presuming to testify against the murderer. The most savage irony of all, undoubtedly, befalls Phoebe Stowe (Jessica Dives) who has to live with the knowledge that she unwittingly provided Corder with the spade that finished off Maria and buried her. Only Ann who marries an older man, Mr. Marten, can somehow in her steadfast devotion to Maria retain an independence and clear sightedness. Sarah Goddard, who studied Drama at Hull University, excels in a motherly role that is part Nelly Dean, part Juliet’s Nurse.

If this critic seems unwontedly to have splurged too much of the plot, it is simply because we know from the first seconds, in the grisly sight of the dead Maria, so much of what is bound to ensue. What is only revealed to us in instalments, however, is the psychological suffering of being a woman at the time. And it is here that the playwright makes her mark. Make no mistake, it is neither the motives of the murderer nor the class war that interest her. We never actually set eyes on William and Lady Cooke (Suzanne Ahmet), by and large, is a kindly patrician, snobby certainly but not without genuine feeling for Maria, and Peter Matthews seems to genuinely love her. 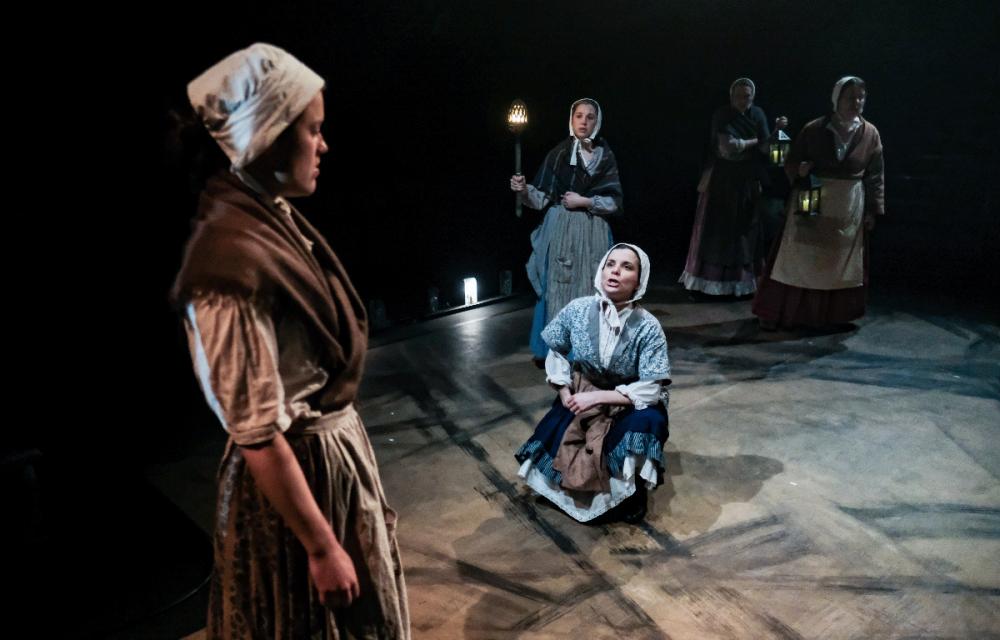 Emma Denly, Susanna Jennings, Suzanne Ahmet, Jessica Dives, Sarah Goddard
All six women in the cast, highly accomplished actors, have rich singing voices which blend together wonderfully in music by Luke Potter which combines the folk idiom with more modern nuances. Here is a play with the highest production values which might have been made for the intimacy of the round. At the end, the actors looked elated but exhausted. They have put so much in and we have taken so much out.

I think we’ve seen the last of Maria Marten, the melodrama!

The Ballad of Maria Marten is at the Stephen Joseph Theatre, Scarborough from 11 to 15 February.