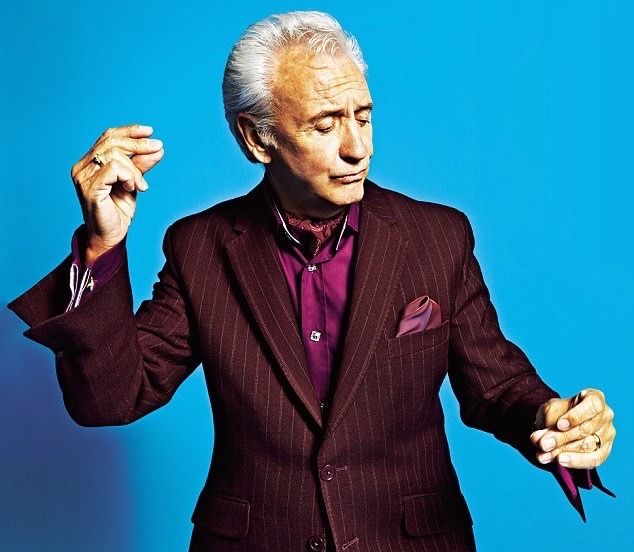 Tony Christie
It is gratifying, in some undirected way, to read about a performer who recognises the debt he or she owes to someone, now largely forgotten, who gave them the impetus, the drive, to develop a career from the most unprepossessing of circumstances.

For Tony Christie, the vibrato-voiced purveyor of many hit ballads, that person was Miss Mills, his music teacher at school in Conisbrough, and the reader is cheered by his belated mention of her recognition of his unique voice, and of her encouragement through his school years.

Tony Christie is a product of an Anglo-Irish, deeply working class background in the pit villages of South Yorkshire. Born Fitzgerald – too many syllables for a would-be star, it was said – the singer with a peerless talent for lifting the rafters with genuine emotional power did not settle naturally into the contemporary dominion of the early sixties – pop and rock and roll. His first love, as revealed in this engaging autobiography, was what has become known as the Great American Songbook: his embryonic forays into music were characterised by the kind of genre that was fashionable for the generation slightly preceding his own – the songs he would have heard at home were the diction-driven love ballads of the likes of Frank Sinatra and Nat King Cole.

Serving an apprenticeship, like so many of his contemporaries – think Dave Berry, Joe Cocker – in the pubs and clubs of Sheffield’s heavy industrial hinterland, Tony Christie, worked phenomenally hard to carve a future for himself, his new wife, Sue and son, Sean. It becomes abundantly clear quite early on in, and throughout The Song Interpreter, that many other career considerations were sacrificed to his family commitments. Alongside a compulsion to make the big time – his early work is marked by many fluctuations of bands and musicians, the Trackers and Penmen uppermost – the singer’s instinct for family and roots proves to be a steadying hand on the tiller. It is somehow unsurprising to discover that alongside their natural children the Christies have also adopted, and that each continues to thrive in their respective careers. It might be added, here, that his father-in-law, John’s, wisdom at crucial moments proved to be a serendipitous corrective to the making of risky decisions.

And what a story! Rendering his past in colourful chronological detail, the reader is by turns entertained and charmed by Tony Christie’s optimism and determination to escape the ‘incarceration’ of the pen-pushing office work that marked his post-school years. But, when ‘I did what I did for Maria’ became a huge hit in 1971 after several years of unsuccessful record-making, you don’t doubt that the singer was genuinely taken aback by the exponential fame which followed the huge sales. The hit was closely followed by the unalloyed successes of ‘Amarillo’ and ‘Avenues & Alleyways’, and several TV and advertising ventures to which Christie lent his voice, further cementing a career already gone stratospheric.

The circles in which Tony Christie now moved precipitated several, infrequent, house moves and the inevitable, though sometimes passing, acquaintance of some of the leading entertainment figures of the day. At times, the book reads like a Who’s Who of the great and good, although to give the game away would be an irritating spoiler for prospective readers hungry for names!


Also by Steve Whitaker...
Poem Of The Week: 'Smuts, Pobs And Goody' By The Irish Health & Homes Creative WritersReview: The Last Cuckoo by Maria FranklandPoem Of The Week: 'Spelling Rickets' By William BedfordIcelandic Sublime: RY X And Ólafur Arnalds CollaborationGhost Flowers: The Poetry Of Emma Simon, Nick On & Hilary Menos
Almost continually in work for approaching sixty years, if Tony Christie ever enjoyed a period of what actors call ‘resting’, then it was during the eighties and a protracted emigration to Spain. It proved, in any case, to be a preparatory hiatus for the huge revival which followed an association with another ‘Who’s Who’ celebrity, comedian Peter Kay. Following a welcome return to the charts in 1999 as a result of a collaboration with another Sheffield son, Jarvis Cocker – with the sharply insightful ballad ‘Walk like a Panther’ - the world was about to be knocked off its axis as efficiently as in 1971.

Initially featuring on Kay’s docu-comedy Phoenix Nights, a meeting with the comedian and Paddy McGuinness, phone calls from several movers and shakers of the music and entertainment industries including Richard Curtis, resulted in a re-recording of ‘Amarillo’ for the 2005 incarnation of Comic Relief. The hilarious video, put together by Kay, and starring countless luminaries of the comedy circuit, featured a cameo from Tony Christie himself.

His career having turned 360 degrees – ‘Amarillo’ went on to replicate the massive success of the early seventies – Tony Christie had found an entirely new audience for his work, alongside those, like me, who were tapping their feet to his hits nearly fifty years ago.

The Song Interpreter, expertly curated and organised with the help of journalist Chris Berry, is a fitting autobiographical swansong to a life steeped in popular music.


Tony Christie – The Song Interpreter is published by Great Northern