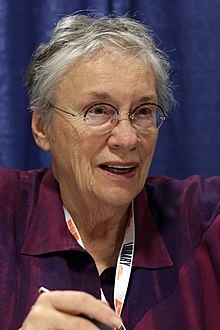 Annie Proulx
To bastardise Jane Austen’s Pride and Prejudice (1813), it is a truth universally acknowledged that a writer in possession of a Pulitzer Prize and international success may garner both reader opprobrium or approbation, irrespective of deserved critical acclaim. Indeed, literary réclame can dissever a potential audience as readily as it can create one. Austen and Proulx sit at polar ends of the literary spectrum, sharing only their ability to inspire devoted acolytes. Marmite springs to mind - that polarising epitome of subjective taste defying the yoke of ubiquitous approval.

Annie Proulx’s fiction, unlike the unapologetically flavoursome and divisive yeast extract, cannot be spread upon toast, however it does dichotomise opinion, appealingly to readers with a taste for bone dry prose, laced with sardonic wit and a thematic motherload saturated with darkly humanistic tragic comedy. Her uncompromising literary worlds immerse the reader in vividly rendered landscapes as remote as they are impervious to the eudaimonia of their stoic inhabitants; settings so relentlessly brutal and beautiful that they both define and deny what it is to be human. Proulx is not an easy read, however I am with the Pulitzer judges in considering her to be a remarkable, unflinching and exceptionally gifted exponent of New Regionalism. Safe to say that this reader is happy to spread Proulx’s fiction all over his consciousness and scrape the jar for more!

Proulx has a literary pedigree which is a fitting testament to her talent. Although she had published a science fiction short story, ‘The Customs Lounge’ in 1963 whilst working as a journalist, her first book was a collection of short stories, published in 1988. Significant literary acclaim came with the publication of her first novel, Postcards (1981) when she was fifty-six, winning the Pen Faulkner Award for Fiction. Her second novel, The Shipping News (1993) won both the Pulitzer Prize for Fiction and the US National Book Award For Fiction.

Both novels use landscape as an impassive setting and as an anthropomorphised antagonist. Her human protagonists are depicted with forensic psychological detail, enabling her to explore aridly dry existential themes, subtly interlaced with humanistic compassion. Black humour distils its satirical force throughout both novels, despite their relentlessly gritty narratives and disturbing thematic orbits.

Both books pull the reader into the vortexes of their Charybdis-strewn universes and yet our unmoored sense of security becomes inexplicably delightful as Proulx sucks us ever deeper into our protagonists’ bitter-sweet lives. Pace defines both works in that the narrative pendulum swings slowly and steadily, ineluctably progressing the plots to their measured denouements as though time itself has no temporal significance. Add to this the economy and precision of Proulx’s jarring prose and geographically infused idiomatic dialogue, and the critical plaudits heaped upon both novels come as no surprise. In 1997, Proulx was awarded the Dos Passos Prize, a hugely estimable garland presented to outstanding American writers mid-career, and an achievement made all the more impressive given her relatively late arrival as an author of fine literature. 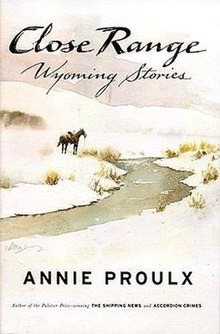 Her second collection of short stories, Close Range: Wyoming Stories (1997) followed hot on the heels of critical recognition. The collection contains the poignant, thematically pioneering ‘Brokeback Mountain’, which was adapted as an Academy Award, BAFTA and Golden Globe Award winning motion picture, released in 2005. The story itself, and one of its siblings, ‘The Mud Below’, both won the O.Henry Prize in 1998 and 1999 respectively. In 1997, Proulx was quoted as saying in an interview that she regretted writing ‘Brokeback Mountain’ because fans failed to accept the necessity for this exposition of homophobia to have an unhappy ending. This is a telling biographical detail. Proulx respects the integrity of her gritty stories far more than the cheers of the critical cognoscenti, or the wish for happy endings voiced by her more idealistic fans.

Appreciating Proulx’s glittering critical trophy haul is not essential to enjoying her work. However, it does make it harder for those who do not, to casually dismiss her work as hard going and grim. Personal taste is of course rightly sovereign, trumping any bestowed accolade, though no informed detractor can claim Proulx’s canon is not worthy, even if not to their own taste.

Short stories can offer the reader comfort, amusement, intrigue or diversion. Proulx uses the form to submerge her reader in the harsh brutality and painful truths of simply existing in a challenging place. The very nature of the short story form lends itself to Proulx’s statically-charged ability to exploit In medias res, compressed narrative structure and expeditious character depiction. She dextrously mines the raw power of this much maligned, but engaging genre.

The need for compression is paramount and Proulx once commented upon this imperative by noting, ‘in the short story, you don’t have room to swing a cat’. Her terse, lean prose perfectly meets the needs of such a confined and authorially demanding creative space. Proulx achieved her sparse prosaic brilliance by putting each story through upwards of thirty drafts, reducing them down to an intense distillation via a process of ruthless whittling: ‘You scrape away and scrape away…until the sentence can barely stand on its legs’.

Whilst there is nothing new about a pronounced regional tradition in American literature, deriving its creative potency from Native American legends, this loose-limbed genre did inexplicably go into hibernation after World War Two, resurfacing as New Regionalism a decade or two later. Proulx falls into this geographically diverse category. Other notable examples include Joyce Carol Oates, Reynolds Price, Larry McMurtry, Cormac McCarthy and Stephen king. Authors within this literary movement respond directly to their physical and cultural environment, exploring the symbiotic dynamics of a specific place and its inhabitants. Landscape and local cultural idiosyncrasies permeate this literature, defining its thematic substance, lexicon, symbolism and tone. It’s literally rooted in the soil of the place from which it originates.

Understanding this rich anthropological seam helps the reader to access Proulx’s distinctive style, thematic resonances and the geographical influences operating upon her creative intent and expression. Her canon is painted upon the canvasses of Wyoming, New England, Texas and Newfoundland, each providing her with the opportunity to astutely explore the semi-permeable membrane co-existent between man and the natural landscape. To read Proulx is to know these places, their people and move from the granularity of individual response to the universality of what it means to be human. 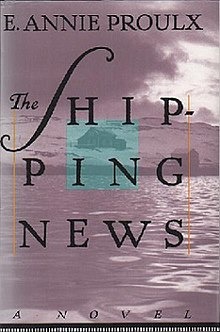 The stories within Close Range exert a vice-like hold over the reader’s attention, rendering them captive between the thin pages of each vignette. Although I can thoroughly recommend both of her novels, Proulx’s gifts as a short story writer are for me second only to the canonical giants of that genre and on an equal footing with the likes of Isaac Babel, Isaac Asimov, J.D. Salinger and dare I say it, O. Henry. Each of the eleven stories within Close Range is set in Wyoming in the western United States, a vast landscape being the tenth largest state by area and the second most sparsely populated in the country. The Beef Bubble of 1868 to 1886, the resultant twenty-year slump in beef prices and the Great Depression all drove their insidious repercussions through Wyoming agriculture. Add into this economic maelstrom the wild climatic variances the state endures, and the sheer force of its natural rhythms and you begin to recognise its potency as both a backdrop and a character in Proulx’s fiction.

In an interview in 1979, Proulx said of her characters, ‘Ranchers are self-reliant, in tune with their surroundings. They make a very tough place to earn a living work; just barely’. Wyoming is her creative muse for these hard-nosed tales and the crucible in which her fiction is made; ‘The prevailing character of a place’ is fundamental to their meaning for, ‘the story is always there’ and Proulx lovingly carved these often grim realities out the rocks, soil and people she so assiduously observed.

The first edition of the collection was illustrated by the celebrated Western painter William Mathews, a close friend of Proulx. Tellingly, Proulx altered some of her stories to reflect Mathews’s images, such was her rigorous devotion to presenting Wyoming and its people with uncompromised, graphic authenticity - a warts and all depiction that flinches from nothing her gaze fell upon, however shocking or tragically disheartening. Honesty like this is born of love for both place and people. Of Wyoming, Proulx once said. ‘It’s charged…what’s there in terms of climate…the way the wind blows, the geology, the geography, how you make your living, who was there before you’, environment ‘orders your life’.

Thematically, Close Range explores mankind’s primal drive to survive, the fragility of morality in the face of cultural and physical adversity, self-identity and self-reliance. It explores masculinity as both a positive and negative force, whilst celebrating cowboy-style epicurean stoicism in the face of economic and natural adversity. Human potential for good and evil are counterbalanced with necessity, tradition and the tenacious pursuit of meaning, even when teleological certainties are subsumed by climatic vicissitudes and the capricious whims of fate.

‘The Mud Below’ is, for me, the standout work in this collection, exploring the metaphor of life itself being a rodeo ride with eight seconds of elation counterpointing the eternity spent on the mud below. Only ‘Blood Bay’ fails to cut the mustard, squeezed into the collection as a pallid reworking of cowboy folklore, but lacking inherent force. It is incongruous only by dint of the dark power of its siblings.


Also by Paul Spalding-Mulcock...
'Mother Doesn't Do Maternal': The Smart Woman's Guide To Murder By Victoria DowdThe Fresh Delight of the Debut Novel'Do Not Believe Too Quickly': A Room Made Of Leaves By Kate GrenvilleWriting Into The Dark: Interview With Caoilinn HughesBanjaxed By The Celtic Tiger: The Wild Laughter By Caoilinn Hughes
Proulx’s characters are drawn with insightful brevity and are as complex as they are convincing. They are tested, found wanting, destroyed, but adored by their creator for their human frailties. Proulx is no ideological moralist sitting in sanctimonious judgement upon the people we meet. Her deep affection for natural beauty never obscures her ability to celebrate the human spirit, even when life has reduced that spirit to dust.

She poses awkward questions of her readers, challenging us to understand the resilient and often flawed people she creates, even when they repel us or violate our own ethical constructs and sensibilities. Saints and sinners live under the same sun and Proulx gives us humanity in all its gruesome, beautiful and multifaceted guises. Sun-bleached humour threads itself through even the most broken, psychologically damaged cast of Beings as she articulates her truncated, but precisely calibrated plots. One of the collection’s stories runs for three paragraphs and is a marvel of both brevity and evocative intensity. Despite its sparse use of words, Proulx gives us infinite unwritten character detail and tempts us to fill in the plot gaps, engaging her reader with consummate skill.

Stepping into the pages of ‘Close Range’ or those of her novels requires the reader to squeeze a lot of lemons, but the juice is undeniably worth it. Reading Proulx may not be for the faint hearted and does require an appetite for brutally reduced, jagged prose. For me, she may be an acquired taste, but like so much in life, the flavoursome is infinitely preferable to the bland !