An Act Of Living: Hidden Music By Ralph Dartford

To the dyslexic kid sitting in a Vauxhall Viva outside a pub in Basildon in 1976, the spark of recognition is a long train coming. Twiddling with the knobs of the car radio whilst his father talks pigeon racing inside, an unlikely epiphany is enacted over the pop and crisps: from Hilversum to the tiny voices of foreigners in the box, from edgy guitars to discordant melodies, the boy arrives at a moment of discovery.

The prelude to Ralph Dartford’s cathartic journey betwixt Music and the Word, between the seminal memory and its expression in poetry, is almost a poem itself; the animated lyricism of Dartford’s recall of a November night in Essex approaches that state of ecstasy from which poems are sometimes distilled. If the moment is an abstraction, a first step, perhaps, into the seductive disorder of a newly defined language of understanding, then this fine homage to his muse is recollected in the tranquility of several decades of hindsight. And, cognizant of a debt throughout, Hidden Music amounts to a skilled and formalised response, an ironically precise reworking of an intractable relationship. Each poem here is catalysed by a song that is meaningful, in some way, to Dartford, and the personal weight of each powerful affiliation renders indistinct any perceived disjuncture between the ideas of poet and narrator. Emotionally-freighted, dignified by honesty, the poet’s words are as sincere to his own mandate as almost to be a given.


Twiddling with the knobs of the car radio whilst his father talks pigeon racing inside, an unlikely epiphany is enacted over the pop and crisps...
That music charges memory with a sense of déjà-vu is another donnée: the most significant moments of our lives are often recalled to the mental accompaniment of songs of contemporary relevance to us. They endure, like beneficent ear-worms, speaking of association, pain, connection, love. Dartford’s approach is tangential: taking an individual song as a starting point, he uses its ongoing resonance to re-examine the double-edged anxiety of relationships, of political division, of candles burned at both ends. And even if he doesn’t engage with the song directly, he finds an equanimity of mood and music, as though the spell a song casts might lead into other, unrelated, planes of reflection. For there may be no semantic connection between what we absorb aurally and the strange transfiguration of sound into words. The music, instead, helps the unchartered poet to make sense of an uncharted past.

Visceral, and in places brutal, this peripatetic observer’s narrative revisitation sometimes breaks apart to release the acrid cordite of bitterness. To the imagined strains of Johnny Cash’s exquisitely self-lacerating rendition of Nine Inch Nails’ Hurt, Dartford corroborates the indissolubly personal nature of autobiographical pain in a shocking poem of sexual abuse, whose desperately moving denouement is realised against a threadbare economy of creeping decay:

‘Realisations can choke.
The empty biscuit tin, the final scrape
of butter. The dirty tuppence from the jar.’ (Breathing Lessons)

This poet is practiced at finding Mr Bleaney in the peeling wallpaper and 40 watt light bulbs of leasehold tenure, though not so much as an exemplar of willed isolation, as a metaphor for the dog-eared derangement of a life that may been lived in dangerous proximity to the edge. For these poems are well-wrought in the best sense – burnished in the unravellings of the past. Like the piss-poor and interchangeable digs of the touring band, whose furniture resembles the bones of the arses upon which any claim to musical identity is perched:

It would all start again soon enough –
other bands in other broken towns. (Tough) 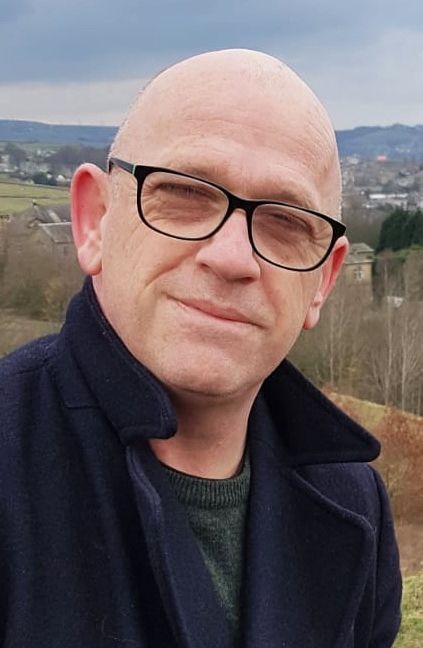 Ralph Dartford
The narrator’s presence, or otherwise, is incidental to the dingy general truth of struggle, of tubercular survival, of the ‘little sparrow’, whose La Vie en Rose makes an inevitable irony of her life on the self-destructive margins, in a time ‘of no caveats and loss of control’.

Dartford’s remarkable poems are often characterised by empathy. The correlation between Piaf and a band motoring away from a gig in Mansfield is refined in the dignity of endurance. And a therapeutic postscript to that sense of being submerged in an excremental abyss, a Malebolge of addiction and excess in which the poet is too well-versed, too prescient, not to have been a direct observer or participant. Therapy Room. 4.26pm describes the result of that ‘loss of control’ which, elsewhere, was one symptom of Piaf’s off-, and occasionally on-, stage persona. The pain, here, is subcutaneous, and it is a tribute to Dartford’s sincerity that he is able to eviscerate it so thoroughly. The poem, a Villanelle of elemental animation, of cataclysmic storms as metaphors for neural disturbance, evokes the shock of abandonment to therapy as though the outcome could be reinforced in alternating lines. The concluding quatrain might be Lear in his madness, willing the worst:

‘We’re the barometers of a pressure profane.
They sit on us, but what’s underneath?
Come heavy weather, beware of the rain.
Four chairs silent, reliant upon pain.’


Like the piss-poor and interchangeable digs of the touring band, whose furniture resembles the bones of the arses upon which any claim to musical identity is perched
The suggestion of ongoing, undirected pain in Max Richter’s profoundly affecting On the Nature of Daylight is its own barometer: gauging pressure by invisible touch, the music reflects as it also, perhaps, deflects the suffering that inheres to the memory of the condition of mental illness - the association between music and words is so emotionally synchronous here as to appear seamless. Elsewhere in Dartford’s collection, consonance is less clear, which is not to undermine his selection because at closer quarters (poems, in any case, demand as much), we may derive a rewarding sense of confluence. The tonal pastiche of the eponymous American folk singer in Woody Guthrie Says carries the storied weight of the narrator’s own life as it is interwoven in the imagination of the narrator, and now the reader, with the freeform riffing of John Coltrane’s saxophone and the coterminous strains of hardship and suffering. As the narrator, and Dartford, rise, like Tony Harrison, determinedly to the surface – ‘My act of living is a volume of poetry’ – we are obliged to embrace a more universal spirit of redemption:

‘I boarded the wrong train to glory,
sensed the return of the razored edge.
I exited to rattling thorns of rain, but
tonight, again, I’ll surrender to his love.’

Thorns and needles make useful figures for rain that is piercing. The condition of suffering, any suffering in this generalia of victims, is reprised often in Hidden Music as though that music might also be a concealed scream, or an act of brutality perpetrated behind closed doors. Or, an explosion unfolding in some faraway land whose only connection with the comfortable numbness of our anodyne existences arrives, like a message from another planet, on our television screens. Escaping Aleppo colours the deeply human curiosity of a boy caught in a warzone in the heaviest of ironies, for the precociously well-read loner’s practiced survival is undermined by the detonation belt round his waist, his escaping of a desiccated town achieved only in death, whilst wondering if the final tree, in whose branches he is now entwined, had ‘ever borne its fruit?’. The counterpoint is crushing, as honest and authentic to victimhood in all of its unlikely forms as Abeer Ameer’s exploration of the Iraq of her extended family in Inhale/Exile.

Attention to the anodyne, to disaffection and to disinterest is a preoccupation for Dartford: an unambiguous political agenda is pulled up short by those who, unable to see the trees for the trees, are afflicted by anger, ignorance or inertia but rarely anything that approximates to a considered position. The thin shadows of Bradford’s Buttershaw estate, deprived of work and retail therapy, rail against immigration and salute the Union flag. If they vote at all, they vote for the very thing that will best undermine their interests. And here, Dartford’s narrator knows it is over, the faces in the streets ‘accepting of lies’ (The Vote). But the desperate fatalism that inheres to this poem of threadbare tercets like mould to damp corners, is an exception in a book of abstract elegiac longing, decency, sincere fellow feeling and love. And if the backdrop to an age reeks of the condition of Thatcherite division – the bottles of curdled milk, ‘the torn wedding-day photos, syringes / and shit’ (Victory to the Miners) are declaimed in tandem with an imagined rendition of Billy Bragg’s sublime Between the Wars - we may still disinter scraps of hope ‘in the imperfect victims of Sheffield’, and those, like the poet, who originate elsewhere, but who share a commonality of class and cultural purpose. The purveyors of condescension, are, as Jarvis Cocker found, as remote from the daily affairs of those they patronise as Knightsbridge from Arundel Gate. It is fortunate that the mettle of collective identity is made of a resistant, high-tensile alloy:

‘A furnace steel city song reveals itself.
A song from the common people.
Those prone to pallor, those profound of faith.’ (From Hoxton Square to Division Street)

The mantraic end-stopped lines work the point home as efficiently as the poet’s existential call to the barricades in Waiting for Geraniums. Dartford’s affiliation is never in question, not least respecting the memory of those who remain meaningful to him. For there are love songs here too, and the poet is at his most focused when stripped back, raw, wildly exposed to the blandishments of remembered connections. Whilst the curious confection of moment and music in Considering Lucy derives its power from suggestion as the Beatles magic the portent of a celestial recurrence into a domestic tableau, Being There stops time in 1984 as the narrator recalls the brevity of a relationship as though caught between passing showers: ‘Marita was her name. The loveliness of the sun'.

The juxtaposition of unrelated thoughts is breathtakingly reconciled, here. But most, in this collection of singular and affecting poems, a paean to filial love, as Dartford is immersed in a synaesthesial struggle to contain an elusive memory. The simple, moving couplets of Alcatraz Housing Estate, Basildon demand no less than reproduction in full:

‘Perhaps once every other summer
there are those sacred hours

when the air, the fragrance and this heat
are all in this singular place.

Sometimes it’s hard to touch nostalgia,
But I swear I almost saw you today.

A trimmed rose, a bookmarked
page. telling me what was for tea.’