“All Oppression Creates A state Of war”*: Christina Dalcher’s Femlandia 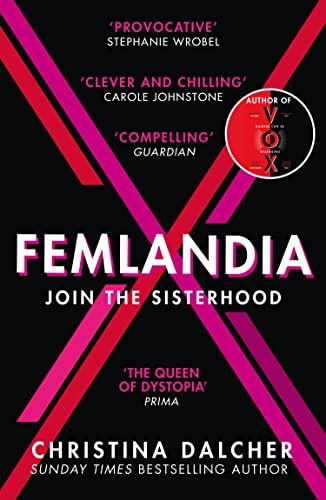 Femlandia is the third novel by US author Christina Dalcher, and her third within the subgenre of feminist dystopian literature.

In the wake of an economic crash, our beleaguered protagonist, Miranda, and her daughter Emma are forced to take to the road, their house and everything in it having been sold off, leaving with barely the clothes on their backs and a couple of rucksacks containing basic provisions for survival. In scenes similar to Susannah Wise’s Fragile Earth, published but a few months earlier, we see mother and child resorting to bikes and pedalling away with no clear direction, hoping their luck will change and fortune will smile upon them.


As the name suggests, Femlandia is an all-female community, cordoned off and independent from the rest of society.
In these introductory pages, Dalcher prefigures our current cost of living crisis and preemptively parodies our dismal state of affairs with eerie prescience, making continual references to “the crisis” as if, back in 2021, she could already feel the pull of the slippery slope: “America was like a windshield with a chink in it that kept expanding”.

Miranda is in denial at first, but as the economic rot sets in, she loses her job, struggles with rising prices, and finds herself having to think more resourcefully to hold out. “Perhaps,” she reflects, “after reading novels about modern-day pandemics, some deeply entrenched survival instinct told us to keep them”. This is a line many of us nowadays can likely relate to, as we lurch from one crisis to the next and find ourselves tightening our belts, living frugally and thinking more creatively to get by. Femlandia is embedded with many such home truths, axioms and thoughts for the day about life, the state of the world and our relationships with one another: “You want to know how people end up homeless, how anyone could turn away or shut a door or hang up a phone? Just start asking for help”.


Indeed, a lady in a cafe raised an eyebrow as she saw me reading it, and expressed her surprise as if I’d been perusing de Beauvoir’s The Second Sex or some other cornerstone of feminist philosophy!
As the name suggests, Femlandia is an all-female community, cordoned off and independent from the rest of society. The camp itself isn’t a futuristic affair, however. A far cry from that of, say, Clayton and Nolan’s 1967 work, Logan’s Run. Here, the women – or womyn in their case, to emphasise their complete autonomy from men – are pulling together in all respects, working the land, building and repairing to keep their community thriving. Initially, Femlandia appears idyllic and a safe haven for Miranda and her daughter as they arrive penniless, low on provisions, as well as bloodied and stunned, having suffered sundry traumatic encounters on the road. But all is not what it seems.

Femlandia isn’t the man-bashing user manual it’s cracked up to be. Its title is a bit misleading in that respect. Indeed, a lady in a cafe raised an eyebrow as she saw me reading it, and expressed her surprise as if I’d been perusing de Beauvoir’s The Second Sex or some other cornerstone of feminist philosophy! Whilst Miranda’s mother, Win, the founder of Femlandia, is depicted as the ultimate misandrist, and the character Jen Jones a keen acolyte, Femlandia isn’t an anti-male tract: “It’s not like evil and assholes are encoded in the Y chromosome”. Defences, as well as criticisms, are reserved throughout for both sexes alike.


Her voice gets drier and more acerbic with each outing...
The titular Femlandia, or safe haven for women, is depicted warts and all, for as the rule of thumb goes: one person’s utopia is another’s dystopia. Femlandia, we learn, is in many ways counterproductive and dystopic for women. Miranda is ostracised and rendered persona non grata from the outset for asking too many questions and bucking authority. It isn’t long before she finds herself at loggerheads with the camp’s outwardly saccharine yet inwardly pitiless matriarch, Jen Jones. Multiple sanctions are incurred as Miranda dons her deerstalker and begins to uncover the camp’s rotten foundations. Possibly the worst of its dirty little secrets is the holding pen where she discovers male children being held in captivity. Some of these children, she learns, have been snatched from mothers at the camp, only to be hidden away and kept like cattle for future breeding purposes so the order can secure a means of propagation.

To date, Dalcher’s protagonists have all been mother figures, suffering at the heart of female-targeted nightmares. And in each of her works, there have been recursive themes such as new misogynistic systems of government, the erosion of women’s liberties, and family units becoming fractured. In Femlandia, this negative recipe is poisoned further due to a lack of female camaraderie. Miranda receives no support from the sisters at the camp and is left to fight her battles alone. Even her daughter turns against her, succumbing instead to the doctrines of the camp’s sisterhood. Single-handedly, therefore, Miranda becomes a spanner in Femlandia’s works, undoing the nuts and bolts of its order, and it isn’t long before chinks start to show in the camp’s armour. As the camp’s malpractices and past injustices are brought to light, we learn that many of its seemingly happy sisters are in fact not so.

Authors currently writing feminist dystopian fiction will often find themselves likened to Margaret Atwood, and their works compared in some way to The Handmaid’s Tale. Perhaps not unjustly so, for The Handmaid’s Tale is arguably the 1984 of this particular subgenre and thus a tough act to follow. Indeed, many might deem such comparisons commendable. But it can be a little wearying at times to pick up an author’s latest, skim the dust jacket and continually read such taglines as: “The Handmaid’s Tale for a new generation”, as has been the case for the likes of Naomi Alderman’s The Power, Louise O’Neill’s Only Ever Yours, as well as all three of Dalcher’s works to date. However, Dalcher is carving herself quite the niche within her chosen genre. Her voice gets drier and more acerbic with each outing, and her offerings just keep getting better and better.


Femlandia is published by HQ.