Sarah Connor Not So Silent Night

Jolly Time Of Year, Ring Out The Bells; Not So Silent Night; Blame It On The Mistletoe; 24th; (1,2,3,4) Shots Of Patron; Christmas 2066; Santa, If You're There; Quiet White; Come Home; I Think I'm In Love With You; Don't You Know That It's Christmas; The Christmas Song. 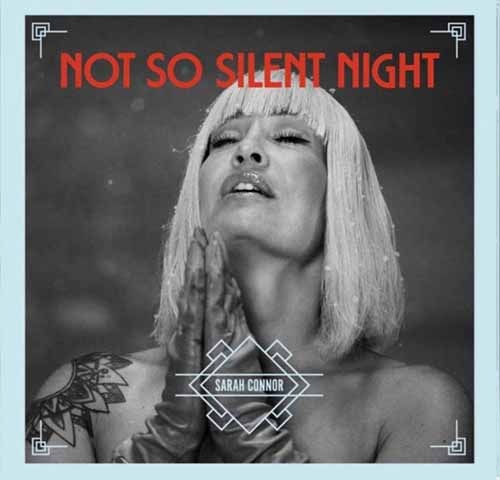 Although not a household name in the UK, on her home turf in Germany, Sarah is one of the biggest selling recording artists ever. Having debuted back in 2000 as an English language artist, she did enjoy brief chart success around the world with the singles Bounce and the TQ featuring Let's Get Back To Bed, Boy. However, in more recent years, Connor has reclaimed the hearts of her German-audience with a series of German language albums, that have had us equally impressed and landed in our Top 10 Albums for their year of release. As she returns to recording in English, she marks the release of her second seasonal collection; Not So Silent Night.

As we all know, every man and his dog has released either a Christmas single or a Christmas album - but it is only those who really understand the seasonal requirements that really excel in the area. Although her first Christmas album, 2005's Christmas In My Heart, was a powerful noughties pop outing, it didn't quite land in the Christmas legend bracket alongside releases by Mariah, Leona and Kelly.

Not So Silent Night, however, easily does. As an album it is typical Sarah Connor, but just with a seasonal feel. And that means it is not all cheer and cheese, but these key ingredients do make a prominent feature.

Contending for the crown of Christmas there is sensational opener Jolly Time of the Year and the tender 24th, but it is with the epic anthem Ring Out The Bells that Not So Silent Night will ensure its place on the radio and streaming playlists for decades to come.

Yet there is much to this collection that these sure-fire hits. With the only Christmas flop arriving in the shape of the bizarre (1,2,3,4) Shots of Patron, the album reaches its emotional height with the devastatingly moving Santa, If You're There.

With Not So Silent Night, Sarah Connor plays her seasonal hand near-on-perfectly. This is a classic pop collection which stays true to her artistry and has timeless appeal with heartfelt lyrics and just the right amount of cheesy seasonal wishing.