Cats in Space - Kickstart the Sun 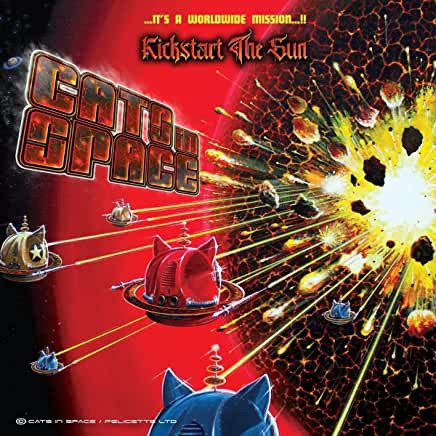 If being in the right place at the right time applied to British rock band Cats In Space then the place would probably be the mid 1970’s rather than in 2022. That is not to say that their music is outdated, far from it - their blend of melodic rock sits proudly alongside groups such as Magnum, ELO, the Alan Parsons Project.

This accomplished new double album starts off with King of Stars. The song sees the band widening their boundaries in terms of ambition and scope. Poke The Witch has already been released as a single - the uplifting song has a touch of a number out of a West End musical, albeit with the melodic hallmarks of Cats In Space.

Teenage Millionaires sounds like the The Sweet at their best, whilst Charlie’s Ego is apparently about a faded Seventies rock star on a track that recalls Queen with some fancy guitar work.

The album title track is a big ballad that contrasts well with the rock orientated tracks on display on the album. Vocalist Damien Edwards gives a soulful vocal on a song that takes the listener back to Foreigner around their heyday.

If you remember the Renaissance track Northern Lights you will hear where the inspiration came from for this song. Smoke and Mirrors comes with the type of keyboard riff you would associate with Toto on a track that again sounds very familiar.

With talent and songs as good as those on this album Cats In Space should be playing large concert halls rather than the club dates this autumn. The band have been going now for well over seven years which shows their determination and persistence, though this new double album is unquestionably their finest work to date.