Now fifty years later, we learn how its very existence came about only as a result of a complete change of mind and direction by the playwright
Sir Alan’s most famous play, a comic masterpiece of social climbing in 1970s’ suburbia, a potent mix of farce and black comedy, still enthrals and delights audiences today. Having premiered in Scarborough, on 26 June 1972, it went on to enormous critical acclaim and box office success. It made its London début at the Criterion Theatre on 4 July 1973, transferring to the Vaudeville Theatre, in September 1974, completing a run of 973 performances. Its official New York Broadway début was at the Music Box Theatre on 8 October 1974 and it ran for 591 performances. It’s true to say it set Ayckbourn on the world stage.

Now fifty years later, we learn how its very existence came about only as a result of a complete change of mind and direction by the playwright. The first hand-written draft, abandoned and long thought lost, has been unearthed by his archivist, Simon Murgatroyd, while delving into the Borthwick Institute of Archives, at the University of York. 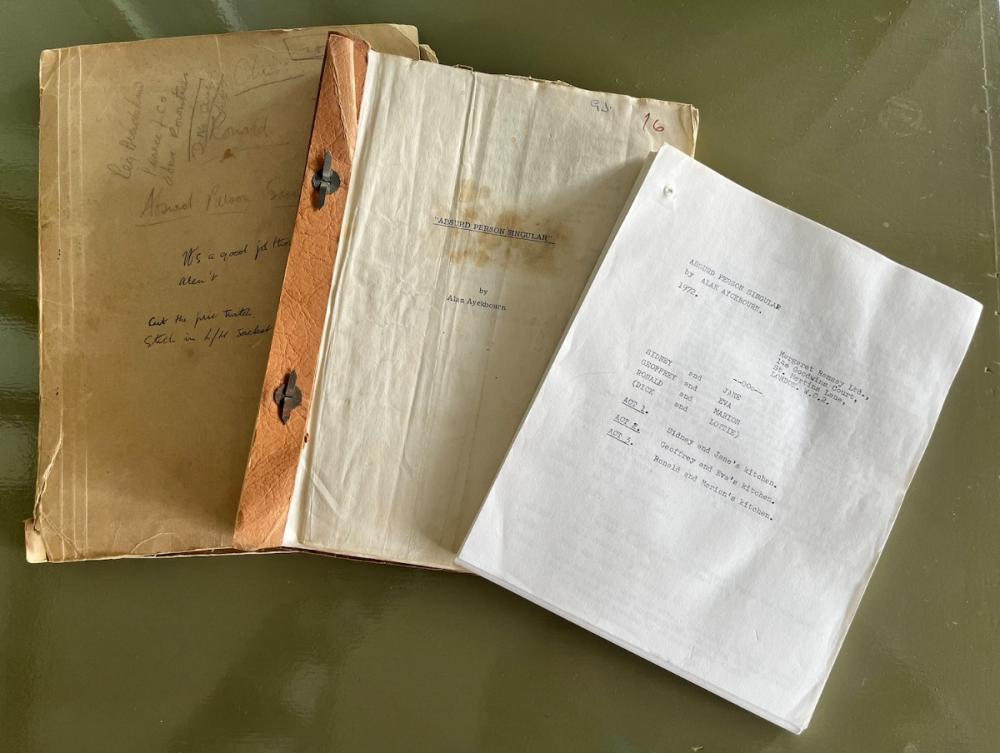 Absurd Manuscripts Photo Credit: Kath Dunn-Mines
The sensational discovery offers a radical new perspective into how one of the key works of late-twentieth-century British Theatre was created. Previously Ayckbourn had spoken of how he abandoned his initial draft of the play after a mere ten pages, moving the action from three living rooms to three kitchens and removing a fourth couple when he began re-writing it.

The new discovery actually suggests he had written a complete first act and half the second act, comprising forty pages. The script, moreover, bears almost no similarity to the actual play with entirely different dialogue, character relations and plot points. What is even more astonishing is that this abandoned script and actual play were all written within the same week!

"This is the sort of find archivists dream of making,” Simon says in understandably excited tones, “and it was astonishing to read these hand-written pages and realise we had found Alan's long believed lost abandoned draft of the play.”


Simon Murgatroyd Photo Credit: Kath Dunn-Mines
Simon, who credits a lifelong love of theatre to having been spellbound by seeing one of Ayckbourn's plays as a boy, has been his archivist since 2005, having launched the playwright's website in 2002. He believes it to be the largest single online resource for a living playwright!

Originally a journalist for the Scarborough Evening News, he has been writing professionally since 2009. His book, Unseen Ayckbourn, first published in 2003, has been recently updated with a wealth of new material.

Now the full story can be told of the rare occasion one of the world’s most prolific playwrights, famous for having the deftest of touches, actually initially got it wrong. We learn how he corrected himself, and went on to produce an acknowledged classic of British Theatre, in a new website jointly launched by Ayckbourn’s archivist and the Borthwick Institute:


This astonishing find completely changes the perceived history of Absurd Person Singular and is unique in the Ayckbourn Archive
Here we discover how Simon, working routinely in the archive in York University, suddenly chanced upon two sealed packets of handwritten notes, not seen since the mid-1970s and long since forgotten by the playwright himself.


APS - First draft page 1 © Haydonning Ltd
What he found were 150 pages of handwritten, foolscap notes in pencil by the playwright. They included several pages of concept notes for Absurd Person Singular, an almost complete hand-written first-draft with more than half-an-hour of material later cut from the play and, most significantly, 40 pages of the 'abandoned draft' - written up to midway through the second act.

This astonishing find completely changes the perceived history of Absurd Person Singular and is unique in the Ayckbourn Archive. Here was nothing less than a work conceived completely differently with half an abandoned play in existence, virtually unrecognisable from the almost complete handwritten first draft of the play with which we are familiar today.


Alan Ayckbourn Photo Credit: Tony Bartholomew
Sir Alan, himself, was impressed by the discovery and the retelling of the journey of the play, which he had forgotten. “A little over a decade ago, the Borthwick acquired my Archive with untold thousands of documents collected over more than five decades,” he said. “My hope was always it would be an archive to be actively enjoyed and which would reveal the previously untold history of my plays.”

He added: “It’s exciting to know that on the 50th anniversary of the world premiere of Absurd Person Singular, the Borthwick and my archivist have re-discovered my earliest notes and drafts of the play - which had long since passed from my own mind!”

Sir Alan was for 37 years Artistic Director at the Stephen Joseph Theatre, Scarborough, retiring a couple of years after suffering a stroke in 2006. Happily, he fought back from that misfortune to continue writing and directing.


Alan Ayckbourn © Haydonning Ltd
His national fame began in 1967 when Relatively Speaking opened at the Duke of York's Theatre, London, to great acclaim. In rapid succession How The Other Half Loves, Absurd Person Singular and The Norman Conquests’ trilogy established his reputation as the playwright who could fill an audience with people who didn’t normally go to the theatre. In 1975, he had the distinction of having the most professional productions performing simultaneously in the West End.

Now we learn something new about one of his greatest achievements, Absurd Person Singular, in time for the fiftieth anniversary.