A World of Echoes: Siren Song By Robert Edric 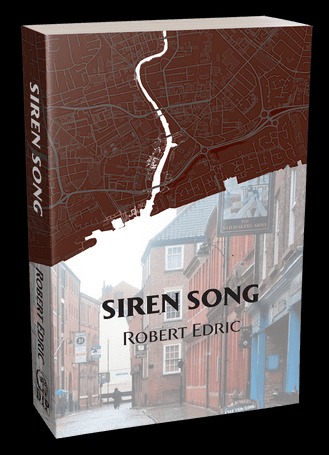 Think muscle-flexing hard man named Marco, and a consortium of less than reputable wealthy men led by Fowler (good aptronym) who keep their hands clean by employing others to do their dirty work; think arson, murder and highly profitable regeneration of rundown streets and warehouses; think people trafficking, the recruitment and mistreatment of illegals, and a gumshoe trying to bring down a criminal empire. Smacks of New York perhaps, Mafia wars, even? No, this is the second in the Song Cycle Quartet by Robert Edric and is set, like his first novel, in the rather more down to earth environs of Hull. The setting and the modern nature of the intrigue give it a sense of realism – so, too, does the fact that the solution is not immediately apparent.


Simon Fowler, is not all he seems and that he was in some way responsible for her daughter’s death, Alison approaches PI Leo Rivers...
Helen Brooks was last seen alive on board a luxury yacht which was later found abandoned in treacherous marshlands. Helen went missing fifteen months ago, believed drowned, although her body has never been washed up; nor too, the body of the second person thought to have been on board the yacht with her. An eye witness, an ex-pilot who knew the waters of the Humber estuary all too well, confirmed seeing both victims on the boat and the Coroner was happy to give an open verdict; in turn, the Police were happy to move on. Foul play may have been suspected but a lack of bodies meant any attempt at an investigation was stalled since nothing could be proven.

Helen’s mother, Alison, is dying of cancer and wants nothing more than to see justice served. Convinced that local entrepreneur, Simon Fowler, is not all he seems and that he was in some way responsible for her daughter’s death, Alison approaches PI Leo Rivers, having been given his name by a mutual friend, Leo’s old partner, John Maxwell. Alison is supported by her other daughter, Louise, who wants her mum to find some peace of mind before she finally shuffles off this mortal coil. The age difference between Louise and Helen was significant and their relationship not perhaps as sisterly as it might have been, but Alison is Louise’s priority.


Was Helen really the girlfriend whose loss he so publicly mourned or did she have other uses?
Once again, Edric’s plot is convoluted and leads away from the initial starting point as it introduces more and more characters, both suspects and victims. Simon Fowler has relocated from London (for reasons, most likely, of personal safety) and wants to re-invent himself as the hero of the hour, respectable and full of civic duty rather than the lying, cheating villain he actually is. That Helen Brooks was linked to Fowler is not in question but in what capacity? He is a local businessman trying to do the people of Hull a favour by regenerating run-down areas, financing projects which would also make him a sizeable profit in the process. He has a watertight alibi for the day of Helen’s disappearance – a little too convenient perhaps.

Was Helen really the girlfriend whose loss he so publicly mourned or did she have other uses? She was no angel, “wilful” her mother admits, and had perhaps found herself too deeply embroiled in a world she didn’t really understand and couldn’t control. Fowler provided her with what she wanted (in its many forms), but for him, at least, it was always a temporary arrangement.


That Laura’s macabre re-modelling of Helen would also contain a clue as to the motivation behind the murder and mayhem which takes place, never occurred to me.
Despite his persistence, Leo finds few people who are prepared to offer adequate answers in his dogged pursuit of the truth. At times, too, it is clear he tries to make the parts fit the broadening narrative his mind creates; square pegs do not fit round holes, leaving him dissatisfied and no nearer to a solution – despite a growing closeness to Louise.

Leo’s investigations take him to Nicholson, the expert eye-witness; to Jane in Leeds, Nicholson’s sister in law; to a salvage yard where the yacht was eventually destroyed, to Irina Kapec, a refugee friend of Yvonne’s and to Helen’s best friend, an artist called Laura Lei, who loved her and who plans to exhibit her finest work - a model of Helen made up of all the detritus of her life which the two had meticulously saved. One example is especially telling: the mouth of the model is made up of Helen’s old lipsticks. I like touches such as these in a novel; they engage the reader, however briefly, on a different level, and yielded, for me, a reminder of an amazing Inter Arts Course I embarked on which required us to explore the inter-relation of the Arts in their many forms. That Laura’s macabre re-modelling of Helen would also contain a clue as to the motivation behind the murder and mayhem which takes place, never occurred to me.

We are re-introduced to Leo’s friends at the news agency; Sonny and Yvonne do what they can to help, advise and scold Leo, all the time trying to keep him safe and on the right path as he makes himself more and more of a nuisance to the police and rather too obviously a thorn in the side of Fowler and his associates. We do get to know a little more of the relationship between the three of them but there is no doubt that once again this novel is driven by the narrative, not the characters, and that narrative takes some unexpected turns – particularly at the end when the pace noticeably quickens. The clue, by the way, is in the title.

Once again, Edric leads us into a web of exploitation, greed, temptation, revenge and violence in another lengthy but gripping case.