A Skyfall of Verbs: Chasing Clouds - Brilliant Adventures In A Poetry Balloon 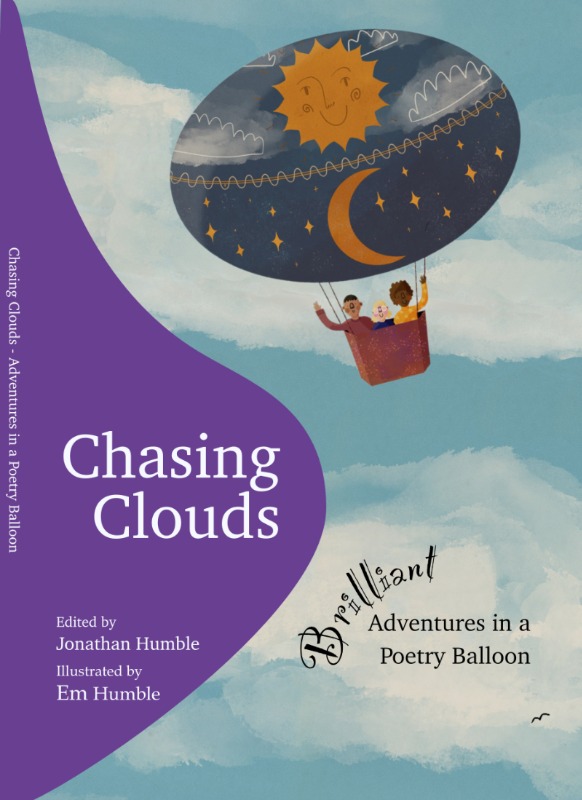 One of the many intriguing things about Chasing Clouds, a fine new anthology of children’s poems, is the protean capacity of several of its contributors to make connections with adult readers. Which is as it should be: kids are embryonic adults, or rather, adults will retain vestiges of childhood sensibilities throughout life. Harry Potter transcends boundaries of reception precisely because J.K. Rowling has created a universe of magical suggestion that is balm to the need for escape in children of all ages, from eight to eighty.

If childhood is a simplified emotional referent, an unformed and unprocessed amalgam of what will follow, then we share this much with it: a proclivity for enchantment and to be moved by the distilled rendering of bonds that we will continue to cherish in perpetuity. Annick Yerem’s affecting reading of our relationship with dogs speaks to anyone, or at least anyone familiar with the unique gift dogs confer. Directed at children, ‘My Dog is a Three-Letter Spell’ brings the simple affirmation, the ‘all joy, all yes’ of canine disposition, towards an intuition most of us will recognise. Yerem’s positioning of the pet’s joyously uncomplicated instinct in the realm of its favoured grub – the ‘tripe valleys’ and ‘sausage mountains’ of its dream-desire – is a prelude to the unconditionally loving transaction of the poem’s final, deliberately separated, lines:

‘My dog is this moment, is present, is a lesson in here.


... some of the poems in the new anthology play directly into that sense of the fantastical, the absurd and the surreal that most animates, especially, very young children.
Beautiful. As, elsewhere is Julie Anna Douglas’ ‘How to Conjure a Poem in Eight Easy Steps’ which, as a numbered introduction to the creative process for children, and a lyrical and metaphor-clotted paean to poetry, acts upon its own mandate. The delicacy and richness of Douglas’ language could not fail to ‘hook’ any passing grown-up. The gift of poetry, just like the gift of cheese that Yerem hopes for her dog, or the grass that Douglas Dunn wished for the concrete-incarcerated Hull flitter in Terry Street, is best inscribed in words whose sibilance we all apprehend:

‘8. Wrap your completed poem in cloud-silk, spun by the
seven silver, singing, sprite sisters of the southern skies’.

Similarly, where Stephanie Henson’s ‘Ballerina Cherry Tree’ serves as a lesson for children in the art of making convincing metaphors, her poem’s received effect ‘dazzles’ as blindingly as ‘Nature’s choreography’.

For as you might expect, and beyond the irresistible thump of rhythm and rhyme, there is a commitment to instruction here - children learn as they are entertained. Whilst the cosmic circularity of American poet, Zaro Weil’s ‘The Wrong Way Round’ telescopes human existence and the trajectory that brought us here in short and precise lines, before rejoining the present on a train journey, Elisabeth Kelly’s dragon in ‘Magic in the Air’ breathes fire into a nascent sense of glorious becoming. Commonly wrapped in metaphor or disguised as fable, the poems may bolster fragile egos, disentangle emotional knots, or affirm the value of difference. In the manner of Larkin’s 'Born Yesterday', Tom Moody’s ‘I Wish’ is a delightful homage to ordinariness, a celebration of self-worth struggling under the poisonous yoke of envy:

Or Paula Thompson’s ‘Elastic Days’ which speaks, pitch-perfectly and in a collusive present-tense, to that sense of endless summer that inheres to long school holidays, of gathered ‘possibilities’ and of doing ‘anything / and nothing’. The fulsome and animated richness of nature in ‘Cutie Fruitie’ by Gaynor Andrews, David Webb’s ‘Look What I’ve Found’ and ‘Spring’s Magic Wings’ by Linda Middleton, encourages close observation of the natural world, as it performs a service to ecology in a wider universe of ignorance and neglect. The simple wonder of Middleton’s achingly musical lyricism is entirely consonant with the spring-like freshness of juvenile experience:

Chasing Clouds has been assembled and curated by poet and former teacher, Jonathan Humble, whose creation of The Dirigible Balloon - a treasure trove of online children’s poems, and invaluable resource for kids, their parents, and teachers alike – is an acclaimed success. Interspersed with thematically-fitting, and sensitively rendered illustrations by Humble’s daughter, Em, some of the poems in the new anthology play directly into that sense of the fantastical, the absurd and the surreal that most animates, especially, very young children. Which is why it is difficult to separate the idea of rhythm and sustained, seductive metre from performative suggestion. Michael Rosen’s poem of a suitcase with ambitions beyond its functional utility introduces an inexorable earworm of his voice into the aural imagination, which enhances the verse’s easy wit no end (‘Suitcase Poem’). And Carole Bromley, in similar vein of crisp repetition and jaunty metre, lures the reader along the airborne path of the honeybee, telling of instinct and collective endeavour:

‘Honeybee, honeybee movement not sound
Tells the others where flowers are found.’ (‘Tell it to the Bees’)

The lunar anthropomorphism of Debra Bertulis’ delightful ‘Sonnet Moon’ yields a mirror to her narrator’s delight in words, conferring the power of music in ‘Sweet notes woven like gossamer’, whilst Jacqueline Shirtliff’s unashamedly celebrant ‘Dance of the Stream Sprite’ performs, in a sequence of alternating, alliterative quatrains and couplets, a dizzying pirouette of theme and form whose rhyme is an irrepressible motor:

‘Shuffle through the shady shallows,
Leap from log to log,
Tango past the tangled brambles,
Tiptoe round the bog.’

The sheer vivacity of this eclectic, and widely provenanced, bevy of poems is its own reward. Delivered with the best of intentions – the collection will provide a rich, hitherto untapped, resource for schools, and all profits from sales will be donated to the National Literacy Trust – its appeal is broad, instructive and profoundly entertaining. Not least in the shape of Val Harris’ gorgeous ‘A Skyfall of Verbs’, whose wisdom resides in its power to combine all in its energetic and cumulative enthusiasm for what we used to call ‘doing words’:

‘I smell the sky in an autumn fire
As it smokes and wraps
Where the swept leaves lie.

I feel the air around my head,
The breath of the wind
And its drawn-out sigh.'